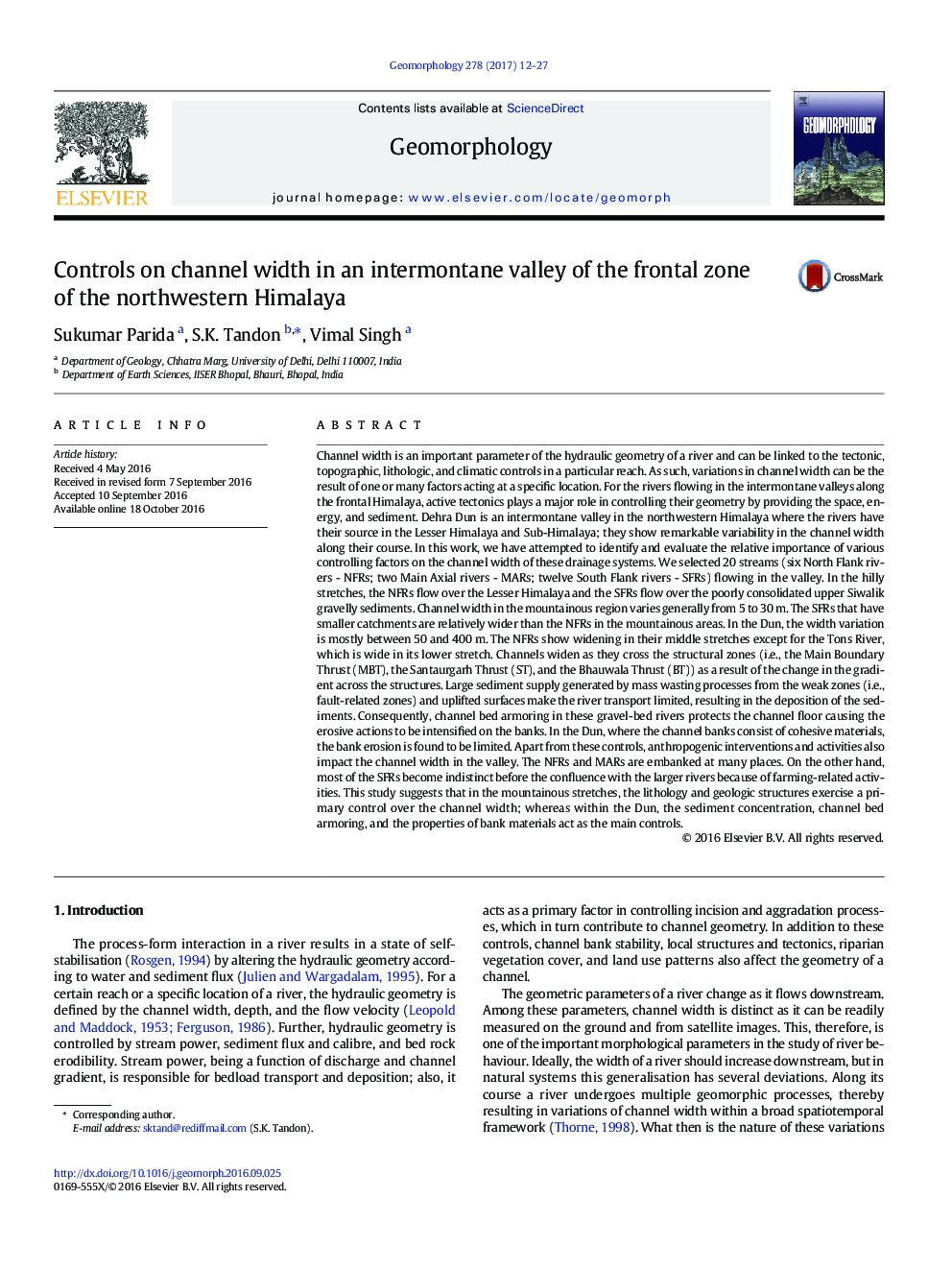 Channel width is an important parameter of the hydraulic geometry of a river and can be linked to the tectonic, topographic, lithologic, and climatic controls in a particular reach. As such, variations in channel width can be the result of one or many factors acting at a specific location. For the rivers flowing in the intermontane valleys along the frontal Himalaya, active tectonics plays a major role in controlling their geometry by providing the space, energy, and sediment. Dehra Dun is an intermontane valley in the northwestern Himalaya where the rivers have their source in the Lesser Himalaya and Sub-Himalaya; they show remarkable variability in the channel width along their course. In this work, we have attempted to identify and evaluate the relative importance of various controlling factors on the channel width of these drainage systems. We selected 20 streams (six North Flank rivers - NFRs; two Main Axial rivers - MARs; twelve South Flank rivers - SFRs) flowing in the valley. In the hilly stretches, the NFRs flow over the Lesser Himalaya and the SFRs flow over the poorly consolidated upper Siwalik gravelly sediments. Channel width in the mountainous region varies generally from 5 to 30 m. The SFRs that have smaller catchments are relatively wider than the NFRs in the mountainous areas. In the Dun, the width variation is mostly between 50 and 400 m. The NFRs show widening in their middle stretches except for the Tons River, which is wide in its lower stretch. Channels widen as they cross the structural zones (i.e., the Main Boundary Thrust (MBT), the Santaurgarh Thrust (ST), and the Bhauwala Thrust (BT)) as a result of the change in the gradient across the structures. Large sediment supply generated by mass wasting processes from the weak zones (i.e., fault-related zones) and uplifted surfaces make the river transport limited, resulting in the deposition of the sediments. Consequently, channel bed armoring in these gravel-bed rivers protects the channel floor causing the erosive actions to be intensified on the banks. In the Dun, where the channel banks consist of cohesive materials, the bank erosion is found to be limited. Apart from these controls, anthropogenic interventions and activities also impact the channel width in the valley. The NFRs and MARs are embanked at many places. On the other hand, most of the SFRs become indistinct before the confluence with the larger rivers because of farming-related activities. This study suggests that in the mountainous stretches, the lithology and geologic structures exercise a primary control over the channel width; whereas within the Dun, the sediment concentration, channel bed armoring, and the properties of bank materials act as the main controls.