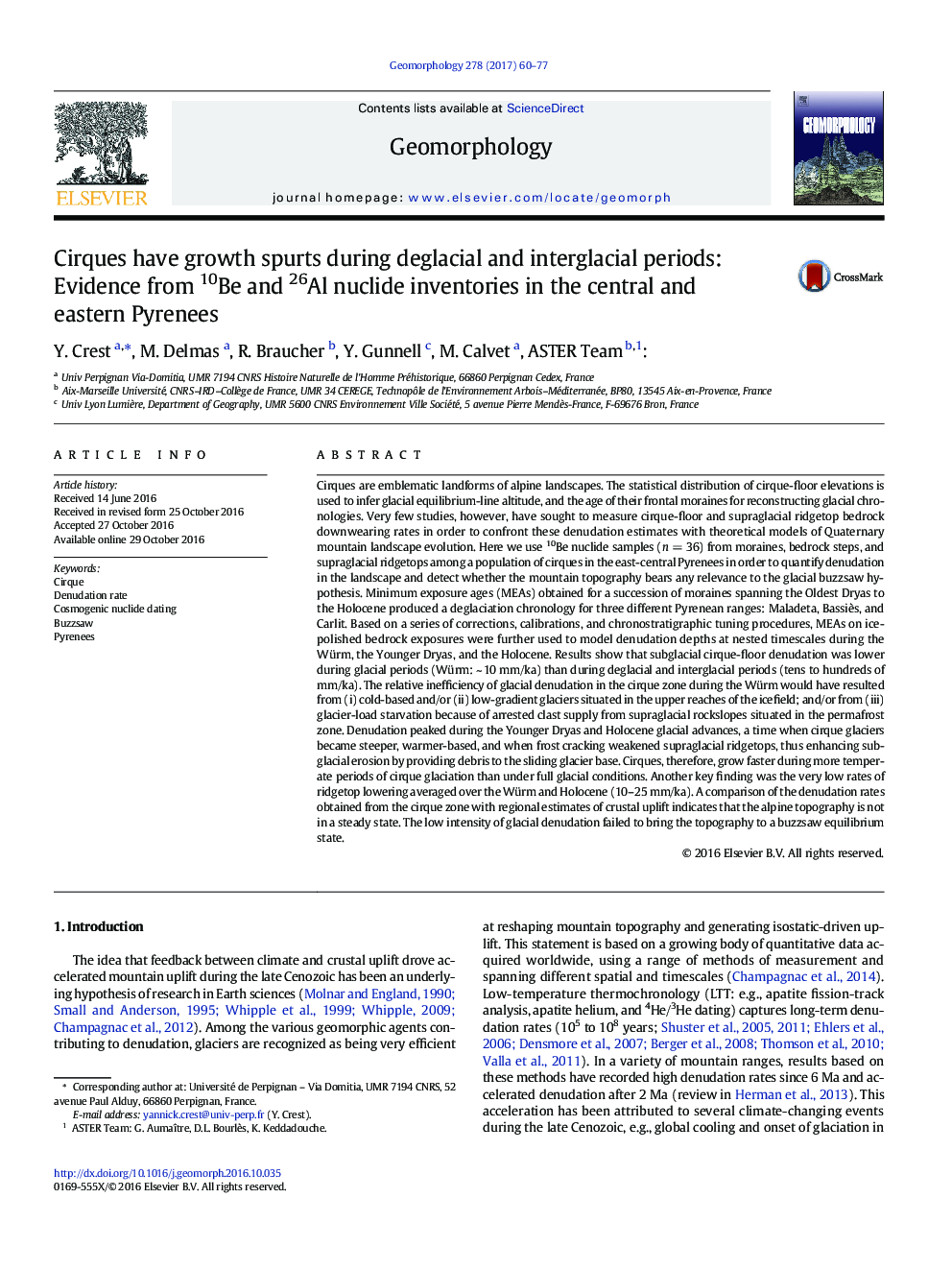 Cirques are emblematic landforms of alpine landscapes. The statistical distribution of cirque-floor elevations is used to infer glacial equilibrium-line altitude, and the age of their frontal moraines for reconstructing glacial chronologies. Very few studies, however, have sought to measure cirque-floor and supraglacial ridgetop bedrock downwearing rates in order to confront these denudation estimates with theoretical models of Quaternary mountain landscape evolution. Here we use 10Be nuclide samples (n = 36) from moraines, bedrock steps, and supraglacial ridgetops among a population of cirques in the east-central Pyrenees in order to quantify denudation in the landscape and detect whether the mountain topography bears any relevance to the glacial buzzsaw hypothesis. Minimum exposure ages (MEAs) obtained for a succession of moraines spanning the Oldest Dryas to the Holocene produced a deglaciation chronology for three different Pyrenean ranges: Maladeta, Bassiès, and Carlit. Based on a series of corrections, calibrations, and chronostratigraphic tuning procedures, MEAs on ice-polished bedrock exposures were further used to model denudation depths at nested timescales during the Würm, the Younger Dryas, and the Holocene. Results show that subglacial cirque-floor denudation was lower during glacial periods (Würm: ~ 10 mm/ka) than during deglacial and interglacial periods (tens to hundreds of mm/ka). The relative inefficiency of glacial denudation in the cirque zone during the Würm would have resulted from (i) cold-based and/or (ii) low-gradient glaciers situated in the upper reaches of the icefield; and/or from (iii) glacier-load starvation because of arrested clast supply from supraglacial rockslopes situated in the permafrost zone. Denudation peaked during the Younger Dryas and Holocene glacial advances, a time when cirque glaciers became steeper, warmer-based, and when frost cracking weakened supraglacial ridgetops, thus enhancing subglacial erosion by providing debris to the sliding glacier base. Cirques, therefore, grow faster during more temperate periods of cirque glaciation than under full glacial conditions. Another key finding was the very low rates of ridgetop lowering averaged over the Würm and Holocene (10–25 mm/ka). A comparison of the denudation rates obtained from the cirque zone with regional estimates of crustal uplift indicates that the alpine topography is not in a steady state. The low intensity of glacial denudation failed to bring the topography to a buzzsaw equilibrium state.