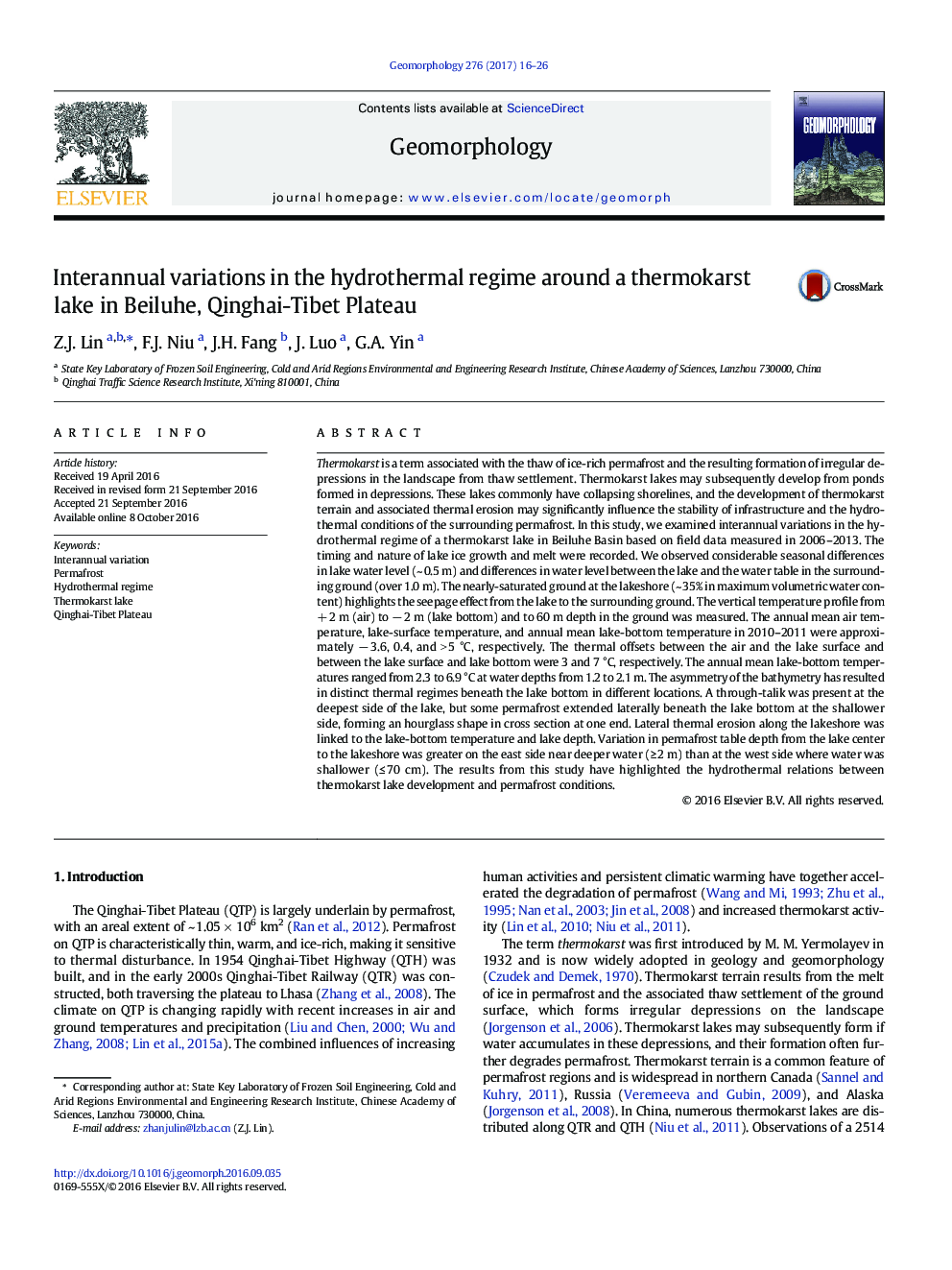 Thermokarst is a term associated with the thaw of ice-rich permafrost and the resulting formation of irregular depressions in the landscape from thaw settlement. Thermokarst lakes may subsequently develop from ponds formed in depressions. These lakes commonly have collapsing shorelines, and the development of thermokarst terrain and associated thermal erosion may significantly influence the stability of infrastructure and the hydrothermal conditions of the surrounding permafrost. In this study, we examined interannual variations in the hydrothermal regime of a thermokarst lake in Beiluhe Basin based on field data measured in 2006–2013. The timing and nature of lake ice growth and melt were recorded. We observed considerable seasonal differences in lake water level (~ 0.5 m) and differences in water level between the lake and the water table in the surrounding ground (over 1.0 m). The nearly-saturated ground at the lakeshore (~ 35% in maximum volumetric water content) highlights the seepage effect from the lake to the surrounding ground. The vertical temperature profile from + 2 m (air) to − 2 m (lake bottom) and to 60 m depth in the ground was measured. The annual mean air temperature, lake-surface temperature, and annual mean lake-bottom temperature in 2010–2011 were approximately − 3.6, 0.4, and > 5 °C, respectively. The thermal offsets between the air and the lake surface and between the lake surface and lake bottom were 3 and 7 °C, respectively. The annual mean lake-bottom temperatures ranged from 2.3 to 6.9 °C at water depths from 1.2 to 2.1 m. The asymmetry of the bathymetry has resulted in distinct thermal regimes beneath the lake bottom in different locations. A through-talik was present at the deepest side of the lake, but some permafrost extended laterally beneath the lake bottom at the shallower side, forming an hourglass shape in cross section at one end. Lateral thermal erosion along the lakeshore was linked to the lake-bottom temperature and lake depth. Variation in permafrost table depth from the lake center to the lakeshore was greater on the east side near deeper water (≥ 2 m) than at the west side where water was shallower (≤ 70 cm). The results from this study have highlighted the hydrothermal relations between thermokarst lake development and permafrost conditions.