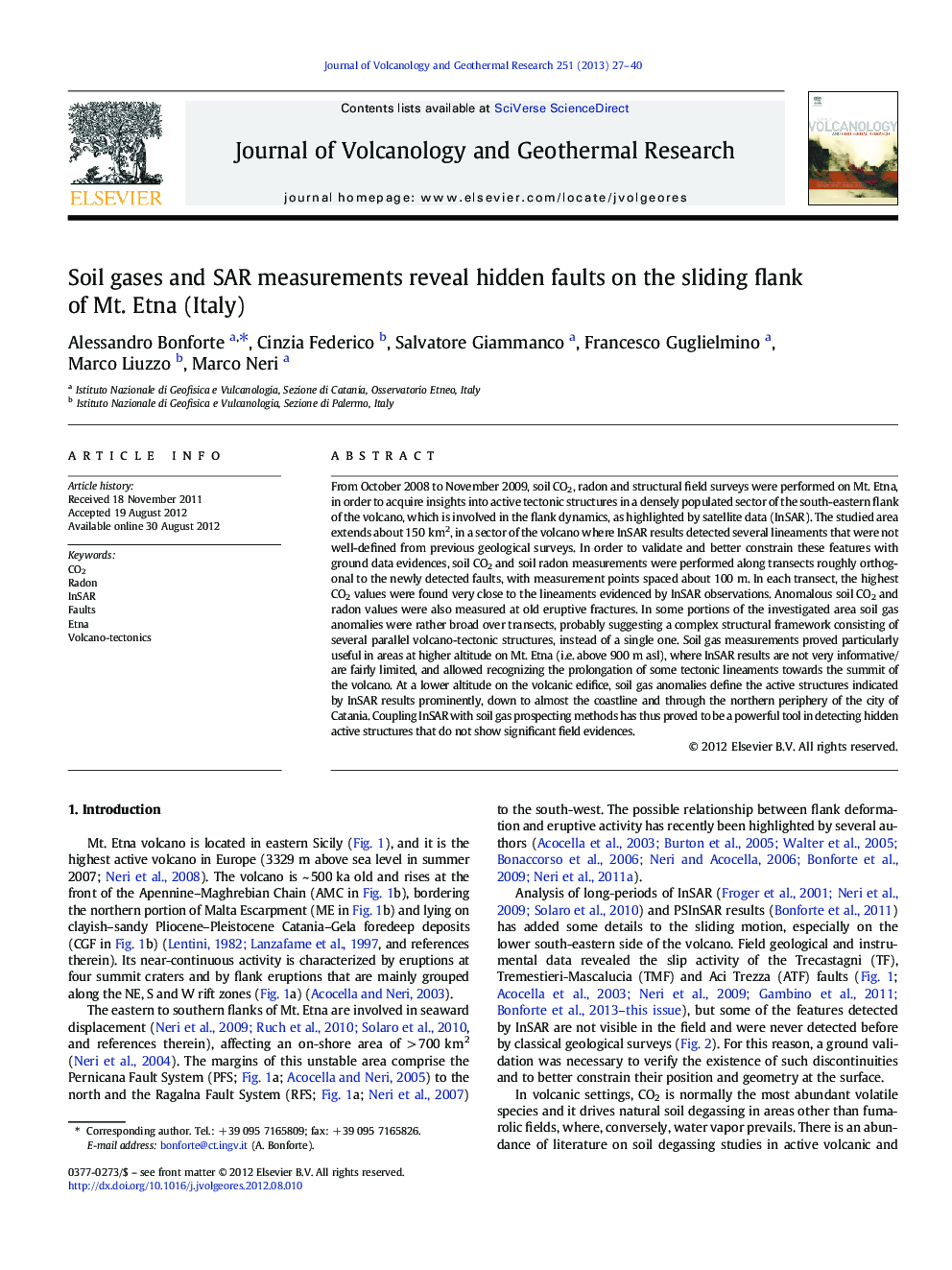 From October 2008 to November 2009, soil CO2, radon and structural field surveys were performed on Mt. Etna, in order to acquire insights into active tectonic structures in a densely populated sector of the south-eastern flank of the volcano, which is involved in the flank dynamics, as highlighted by satellite data (InSAR). The studied area extends about 150 km2, in a sector of the volcano where InSAR results detected several lineaments that were not well-defined from previous geological surveys. In order to validate and better constrain these features with ground data evidences, soil CO2 and soil radon measurements were performed along transects roughly orthogonal to the newly detected faults, with measurement points spaced about 100 m. In each transect, the highest CO2 values were found very close to the lineaments evidenced by InSAR observations. Anomalous soil CO2 and radon values were also measured at old eruptive fractures. In some portions of the investigated area soil gas anomalies were rather broad over transects, probably suggesting a complex structural framework consisting of several parallel volcano-tectonic structures, instead of a single one. Soil gas measurements proved particularly useful in areas at higher altitude on Mt. Etna (i.e. above 900 m asl), where InSAR results are not very informative/are fairly limited, and allowed recognizing the prolongation of some tectonic lineaments towards the summit of the volcano. At a lower altitude on the volcanic edifice, soil gas anomalies define the active structures indicated by InSAR results prominently, down to almost the coastline and through the northern periphery of the city of Catania. Coupling InSAR with soil gas prospecting methods has thus proved to be a powerful tool in detecting hidden active structures that do not show significant field evidences.

► We present an investigation by a geological, geochemical and geophysical approach.
► The multidisciplinary approach allowed detecting faults without surface evidence.
► Faults run across densely populated areas on the sliding SE flank of the volcano.
► The faults accommodate the different velocities of the unstable blocks of Mt. Etna.
► This approach may improve the hazard assessment and geodynamic modeling of Etna.