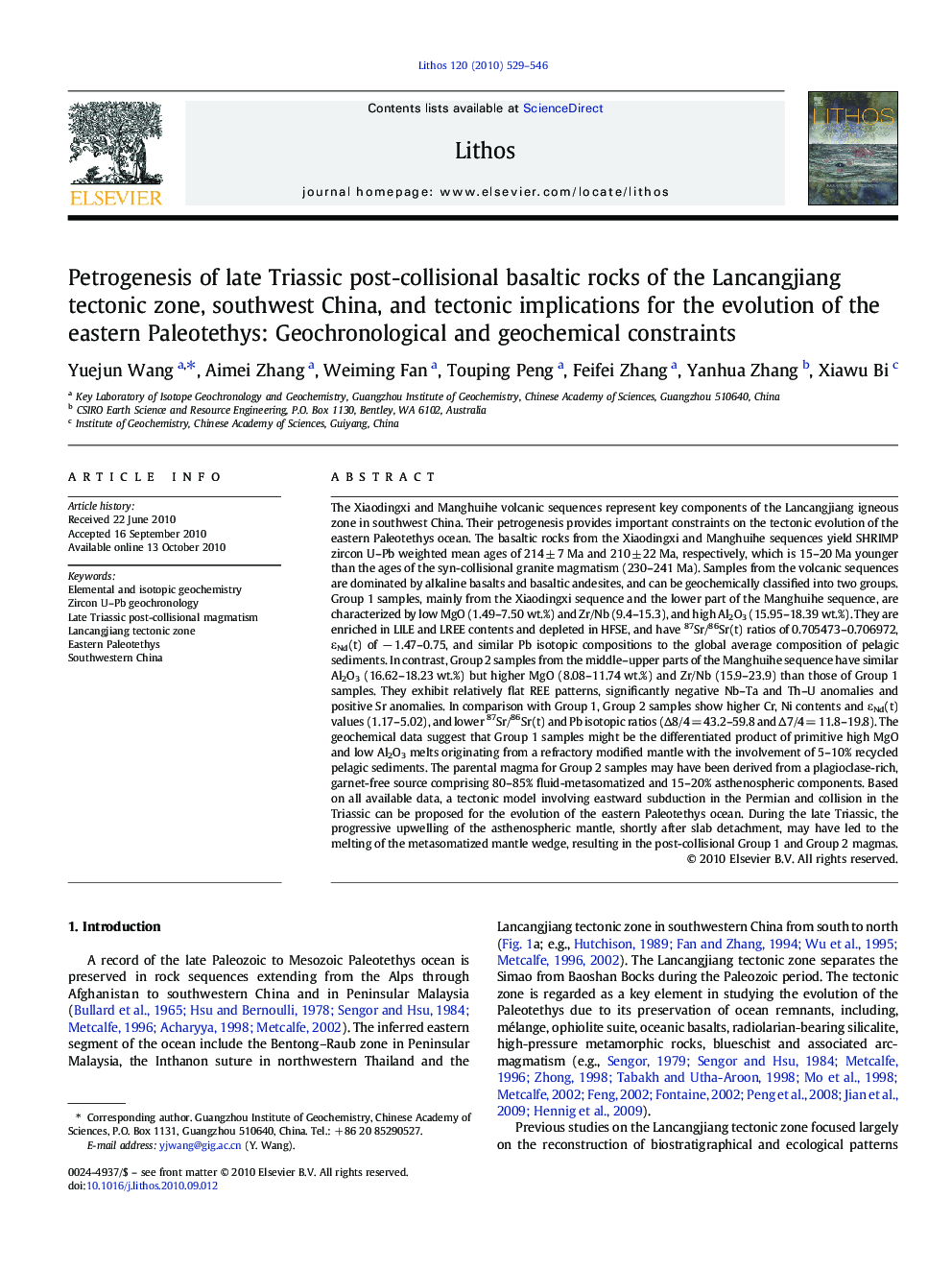 The Xiaodingxi and Manghuihe volcanic sequences represent key components of the Lancangjiang igneous zone in southwest China. Their petrogenesis provides important constraints on the tectonic evolution of the eastern Paleotethys ocean. The basaltic rocks from the Xiaodingxi and Manghuihe sequences yield SHRIMP zircon U–Pb weighted mean ages of 214 ± 7 Ma and 210 ± 22 Ma, respectively, which is 15–20 Ma younger than the ages of the syn-collisional granite magmatism (230–241 Ma). Samples from the volcanic sequences are dominated by alkaline basalts and basaltic andesites, and can be geochemically classified into two groups. Group 1 samples, mainly from the Xiaodingxi sequence and the lower part of the Manghuihe sequence, are characterized by low MgO (1.49–7.50 wt.%) and Zr/Nb (9.4–15.3), and high Al2O3 (15.95–18.39 wt.%). They are enriched in LILE and LREE contents and depleted in HFSE, and have 87Sr/86Sr(t) ratios of 0.705473–0.706972, εNd(t) of − 1.47–0.75, and similar Pb isotopic compositions to the global average composition of pelagic sediments. In contrast, Group 2 samples from the middle–upper parts of the Manghuihe sequence have similar Al2O3 (16.62–18.23 wt.%) but higher MgO (8.08–11.74 wt.%) and Zr/Nb (15.9–23.9) than those of Group 1 samples. They exhibit relatively flat REE patterns, significantly negative Nb–Ta and Th–U anomalies and positive Sr anomalies. In comparison with Group 1, Group 2 samples show higher Cr, Ni contents and εNd(t) values (1.17–5.02), and lower 87Sr/86Sr(t) and Pb isotopic ratios (Δ8/4 = 43.2–59.8 and Δ7/4 = 11.8–19.8). The geochemical data suggest that Group 1 samples might be the differentiated product of primitive high MgO and low Al2O3 melts originating from a refractory modified mantle with the involvement of 5–10% recycled pelagic sediments. The parental magma for Group 2 samples may have been derived from a plagioclase-rich, garnet-free source comprising 80–85% fluid-metasomatized and 15–20% asthenospheric components. Based on all available data, a tectonic model involving eastward subduction in the Permian and collision in the Triassic can be proposed for the evolution of the eastern Paleotethys ocean. During the late Triassic, the progressive upwelling of the asthenospheric mantle, shortly after slab detachment, may have led to the melting of the metasomatized mantle wedge, resulting in the post-collisional Group 1 and Group 2 magmas.

Research Highlights
► The Xiaodingxi and Manghuihe volcanic units in the post-collisional setting formed at 210–214 Ma.
► Group 1 (low MgO and high Al2O3) and 2 (high MgO and high Al2O3) can be geochemically identified.
► Group 1 and 2 are respectively derived from the source metasomatized by recycled sediment and fluid.
► Permian eastward subduction and Triassic collision are proposed for eastern Paleotethys.