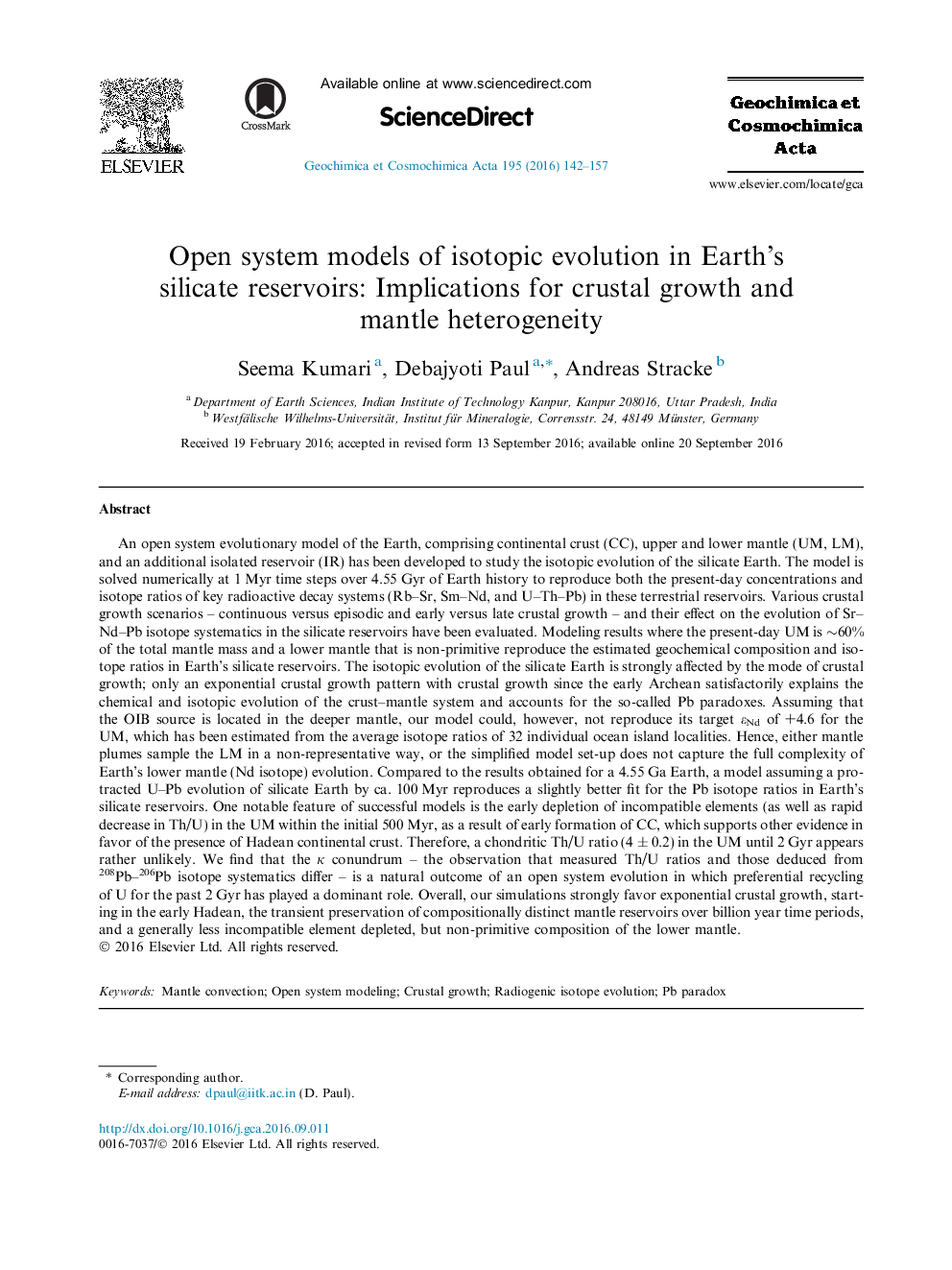 An open system evolutionary model of the Earth, comprising continental crust (CC), upper and lower mantle (UM, LM), and an additional isolated reservoir (IR) has been developed to study the isotopic evolution of the silicate Earth. The model is solved numerically at 1Â Myr time steps over 4.55Â Gyr of Earth history to reproduce both the present-day concentrations and isotope ratios of key radioactive decay systems (Rb-Sr, Sm-Nd, and U-Th-Pb) in these terrestrial reservoirs. Various crustal growth scenarios - continuous versus episodic and early versus late crustal growth - and their effect on the evolution of Sr-Nd-Pb isotope systematics in the silicate reservoirs have been evaluated. Modeling results where the present-day UM is â¼60% of the total mantle mass and a lower mantle that is non-primitive reproduce the estimated geochemical composition and isotope ratios in Earth's silicate reservoirs. The isotopic evolution of the silicate Earth is strongly affected by the mode of crustal growth; only an exponential crustal growth pattern with crustal growth since the early Archean satisfactorily explains the chemical and isotopic evolution of the crust-mantle system and accounts for the so-called Pb paradoxes. Assuming that the OIB source is located in the deeper mantle, our model could, however, not reproduce its target ÉNd of +4.6 for the UM, which has been estimated from the average isotope ratios of 32 individual ocean island localities. Hence, either mantle plumes sample the LM in a non-representative way, or the simplified model set-up does not capture the full complexity of Earth's lower mantle (Nd isotope) evolution. Compared to the results obtained for a 4.55Â Ga Earth, a model assuming a protracted U-Pb evolution of silicate Earth by ca. 100Â Myr reproduces a slightly better fit for the Pb isotope ratios in Earth's silicate reservoirs. One notable feature of successful models is the early depletion of incompatible elements (as well as rapid decrease in Th/U) in the UM within the initial 500Â Myr, as a result of early formation of CC, which supports other evidence in favor of the presence of Hadean continental crust. Therefore, a chondritic Th/U ratio (4Â Â±Â 0.2) in the UM until 2Â Gyr appears rather unlikely. We find that the Îº conundrum - the observation that measured Th/U ratios and those deduced from 208Pb-206Pb isotope systematics differ - is a natural outcome of an open system evolution in which preferential recycling of U for the past 2Â Gyr has played a dominant role. Overall, our simulations strongly favor exponential crustal growth, starting in the early Hadean, the transient preservation of compositionally distinct mantle reservoirs over billion year time periods, and a generally less incompatible element depleted, but non-primitive composition of the lower mantle.