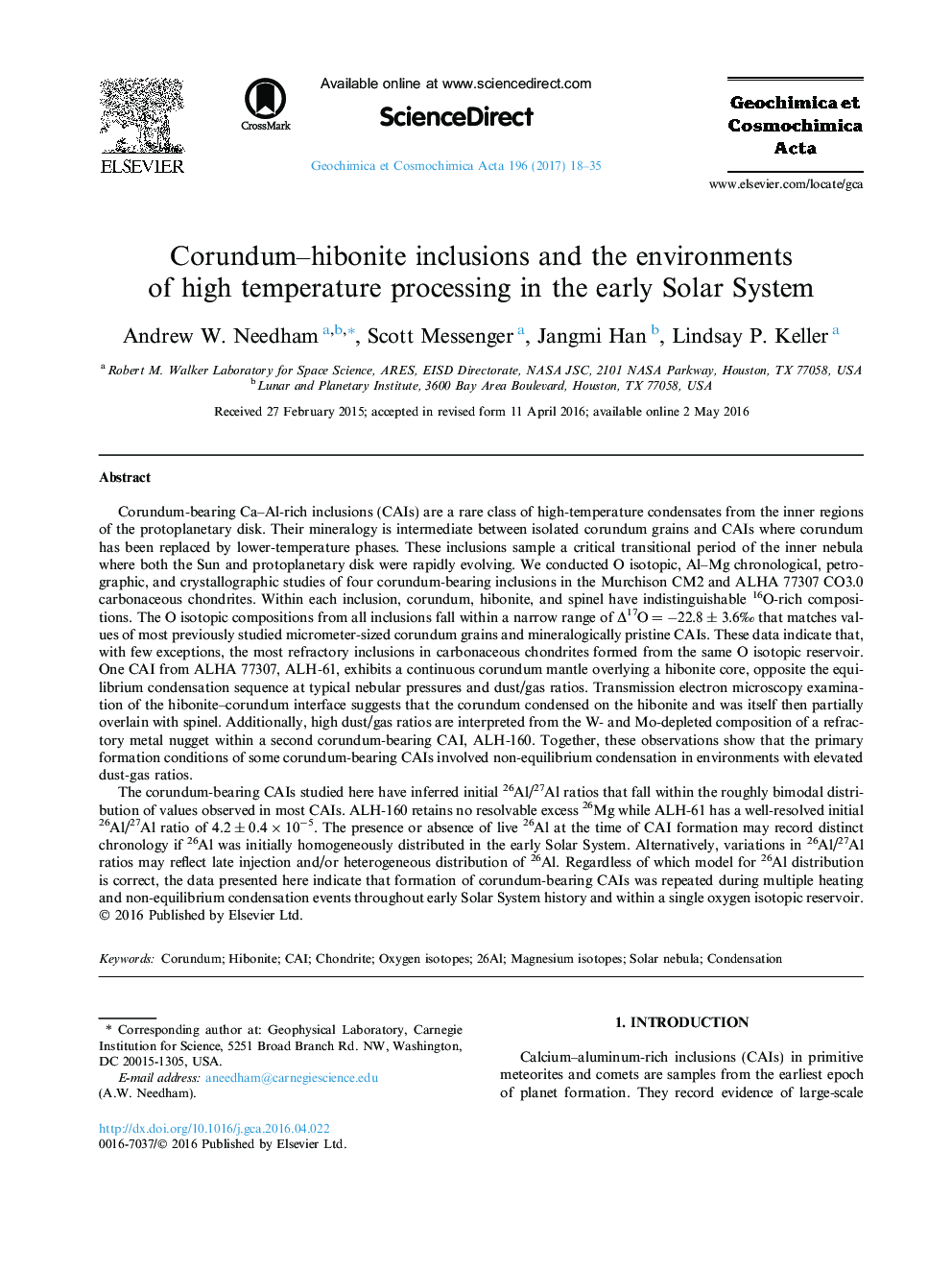 Corundum-bearing Ca-Al-rich inclusions (CAIs) are a rare class of high-temperature condensates from the inner regions of the protoplanetary disk. Their mineralogy is intermediate between isolated corundum grains and CAIs where corundum has been replaced by lower-temperature phases. These inclusions sample a critical transitional period of the inner nebula where both the Sun and protoplanetary disk were rapidly evolving. We conducted O isotopic, Al-Mg chronological, petrographic, and crystallographic studies of four corundum-bearing inclusions in the Murchison CM2 and ALHA 77307 CO3.0 carbonaceous chondrites. Within each inclusion, corundum, hibonite, and spinel have indistinguishable 16O-rich compositions. The O isotopic compositions from all inclusions fall within a narrow range of Î17OÂ =Â â22.8Â Â±Â 3.6â° that matches values of most previously studied micrometer-sized corundum grains and mineralogically pristine CAIs. These data indicate that, with few exceptions, the most refractory inclusions in carbonaceous chondrites formed from the same O isotopic reservoir. One CAI from ALHA 77307, ALH-61, exhibits a continuous corundum mantle overlying a hibonite core, opposite the equilibrium condensation sequence at typical nebular pressures and dust/gas ratios. Transmission electron microscopy examination of the hibonite-corundum interface suggests that the corundum condensed on the hibonite and was itself then partially overlain with spinel. Additionally, high dust/gas ratios are interpreted from the W- and Mo-depleted composition of a refractory metal nugget within a second corundum-bearing CAI, ALH-160. Together, these observations show that the primary formation conditions of some corundum-bearing CAIs involved non-equilibrium condensation in environments with elevated dust-gas ratios.The corundum-bearing CAIs studied here have inferred initial 26Al/27Al ratios that fall within the roughly bimodal distribution of values observed in most CAIs. ALH-160 retains no resolvable excess 26Mg while ALH-61 has a well-resolved initial 26Al/27Al ratio of 4.2Â Â±Â 0.4Â ÃÂ 10â5. The presence or absence of live 26Al at the time of CAI formation may record distinct chronology if 26Al was initially homogeneously distributed in the early Solar System. Alternatively, variations in 26Al/27Al ratios may reflect late injection and/or heterogeneous distribution of 26Al. Regardless of which model for 26Al distribution is correct, the data presented here indicate that formation of corundum-bearing CAIs was repeated during multiple heating and non-equilibrium condensation events throughout early Solar System history and within a single oxygen isotopic reservoir.