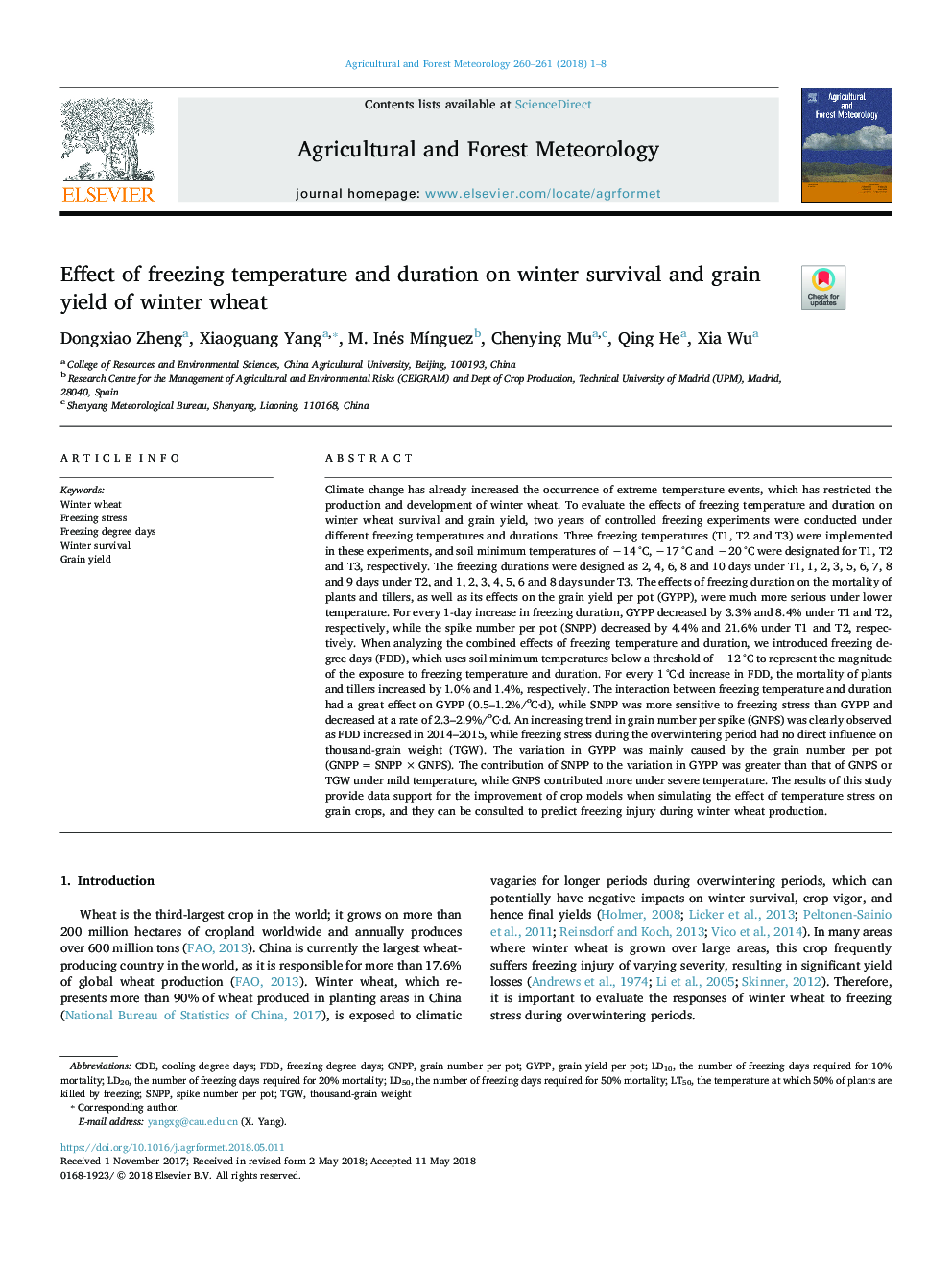 چکیده انگلیسی
Climate change has already increased the occurrence of extreme temperature events, which has restricted the production and development of winter wheat. To evaluate the effects of freezing temperature and duration on winter wheat survival and grain yield, two years of controlled freezing experiments were conducted under different freezing temperatures and durations. Three freezing temperatures (T1, T2 and T3) were implemented in these experiments, and soil minimum temperatures of â14â¯Â°C, â17â¯Â°C and â20â¯Â°C were designated for T1, T2 and T3, respectively. The freezing durations were designed as 2, 4, 6, 8 and 10 days under T1, 1, 2, 3, 5, 6, 7, 8 and 9 days under T2, and 1, 2, 3, 4, 5, 6 and 8 days under T3. The effects of freezing duration on the mortality of plants and tillers, as well as its effects on the grain yield per pot (GYPP), were much more serious under lower temperature. For every 1-day increase in freezing duration, GYPP decreased by 3.3% and 8.4% under T1 and T2, respectively, while the spike number per pot (SNPP) decreased by 4.4% and 21.6% under T1 and T2, respectively. When analyzing the combined effects of freezing temperature and duration, we introduced freezing degree days (FDD), which uses soil minimum temperatures below a threshold of â12â¯Â°C to represent the magnitude of the exposure to freezing temperature and duration. For every 1â¯Â°CÂ·d increase in FDD, the mortality of plants and tillers increased by 1.0% and 1.4%, respectively. The interaction between freezing temperature and duration had a great effect on GYPP (0.5-1.2%/oCÂ·d), while SNPP was more sensitive to freezing stress than GYPP and decreased at a rate of 2.3-2.9%/oCÂ·d. An increasing trend in grain number per spike (GNPS) was clearly observed as FDD increased in 2014-2015, while freezing stress during the overwintering period had no direct influence on thousand-grain weight (TGW). The variation in GYPP was mainly caused by the grain number per pot (GNPPâ¯=â¯SNPPâ¯Ãâ¯GNPS). The contribution of SNPP to the variation in GYPP was greater than that of GNPS or TGW under mild temperature, while GNPS contributed more under severe temperature. The results of this study provide data support for the improvement of crop models when simulating the effect of temperature stress on grain crops, and they can be consulted to predict freezing injury during winter wheat production.
ناشر
Database: Elsevier - ScienceDirect (ساینس دایرکت)
Journal: Agricultural and Forest Meteorology - Volumes 260â261, 15 October 2018, Pages 1-8
نویسندگان
Dongxiao Zheng, Xiaoguang Yang, M. Inés MÃ­nguez, Chenying Mu, Qing He, Xia Wu,
دانلود مقاله + سفارش ترجمه
دانلود مقاله ISI انگلیسی
رایگان برای ایرانیان
سفارش ترجمه تخصصی
با تضمین قیمت و کیفیت
منتشر شده در