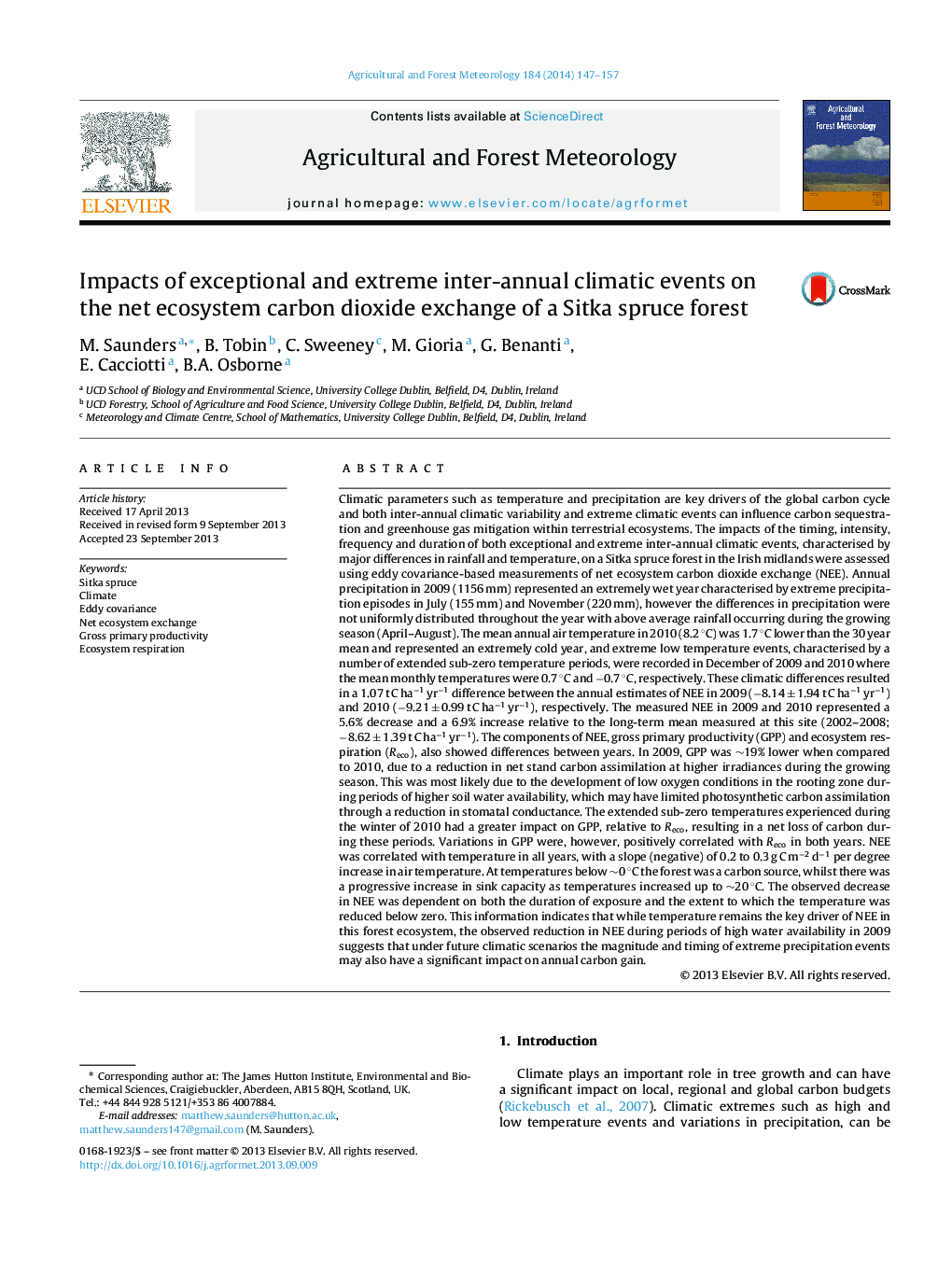 چکیده انگلیسی
Climatic parameters such as temperature and precipitation are key drivers of the global carbon cycle and both inter-annual climatic variability and extreme climatic events can influence carbon sequestration and greenhouse gas mitigation within terrestrial ecosystems. The impacts of the timing, intensity, frequency and duration of both exceptional and extreme inter-annual climatic events, characterised by major differences in rainfall and temperature, on a Sitka spruce forest in the Irish midlands were assessed using eddy covariance-based measurements of net ecosystem carbon dioxide exchange (NEE). Annual precipitation in 2009 (1156Â mm) represented an extremely wet year characterised by extreme precipitation episodes in July (155Â mm) and November (220Â mm), however the differences in precipitation were not uniformly distributed throughout the year with above average rainfall occurring during the growing season (April-August). The mean annual air temperature in 2010 (8.2Â Â°C) was 1.7Â Â°C lower than the 30 year mean and represented an extremely cold year, and extreme low temperature events, characterised by a number of extended sub-zero temperature periods, were recorded in December of 2009 and 2010 where the mean monthly temperatures were 0.7Â Â°C and â0.7Â Â°C, respectively. These climatic differences resulted in a 1.07Â tÂ CÂ haâ1Â yrâ1 difference between the annual estimates of NEE in 2009 (â8.14Â Â±Â 1.94Â tÂ CÂ haâ1Â yrâ1) and 2010 (â9.21Â Â±Â 0.99Â tÂ CÂ haâ1Â yrâ1), respectively. The measured NEE in 2009 and 2010 represented a 5.6% decrease and a 6.9% increase relative to the long-term mean measured at this site (2002-2008; â8.62Â Â±Â 1.39Â tÂ CÂ haâ1Â yrâ1). The components of NEE, gross primary productivity (GPP) and ecosystem respiration (Reco), also showed differences between years. In 2009, GPP was â¼19% lower when compared to 2010, due to a reduction in net stand carbon assimilation at higher irradiances during the growing season. This was most likely due to the development of low oxygen conditions in the rooting zone during periods of higher soil water availability, which may have limited photosynthetic carbon assimilation through a reduction in stomatal conductance. The extended sub-zero temperatures experienced during the winter of 2010 had a greater impact on GPP, relative to Reco, resulting in a net loss of carbon during these periods. Variations in GPP were, however, positively correlated with Reco in both years. NEE was correlated with temperature in all years, with a slope (negative) of 0.2 to 0.3Â gÂ CÂ mâ2Â dâ1 per degree increase in air temperature. At temperatures below â¼0Â Â°C the forest was a carbon source, whilst there was a progressive increase in sink capacity as temperatures increased up to â¼20Â Â°C. The observed decrease in NEE was dependent on both the duration of exposure and the extent to which the temperature was reduced below zero. This information indicates that while temperature remains the key driver of NEE in this forest ecosystem, the observed reduction in NEE during periods of high water availability in 2009 suggests that under future climatic scenarios the magnitude and timing of extreme precipitation events may also have a significant impact on annual carbon gain.
ناشر
Database: Elsevier - ScienceDirect (ساینس دایرکت)
Journal: Agricultural and Forest Meteorology - Volume 184, 15 January 2014, Pages 147-157
نویسندگان
M. Saunders, B. Tobin, C. Sweeney, M. Gioria, G. Benanti, E. Cacciotti, B.A. Osborne,
دانلود مقاله + سفارش ترجمه
دانلود مقاله ISI انگلیسی
رایگان برای ایرانیان
سفارش ترجمه تخصصی
با تضمین قیمت و کیفیت
منتشر شده در