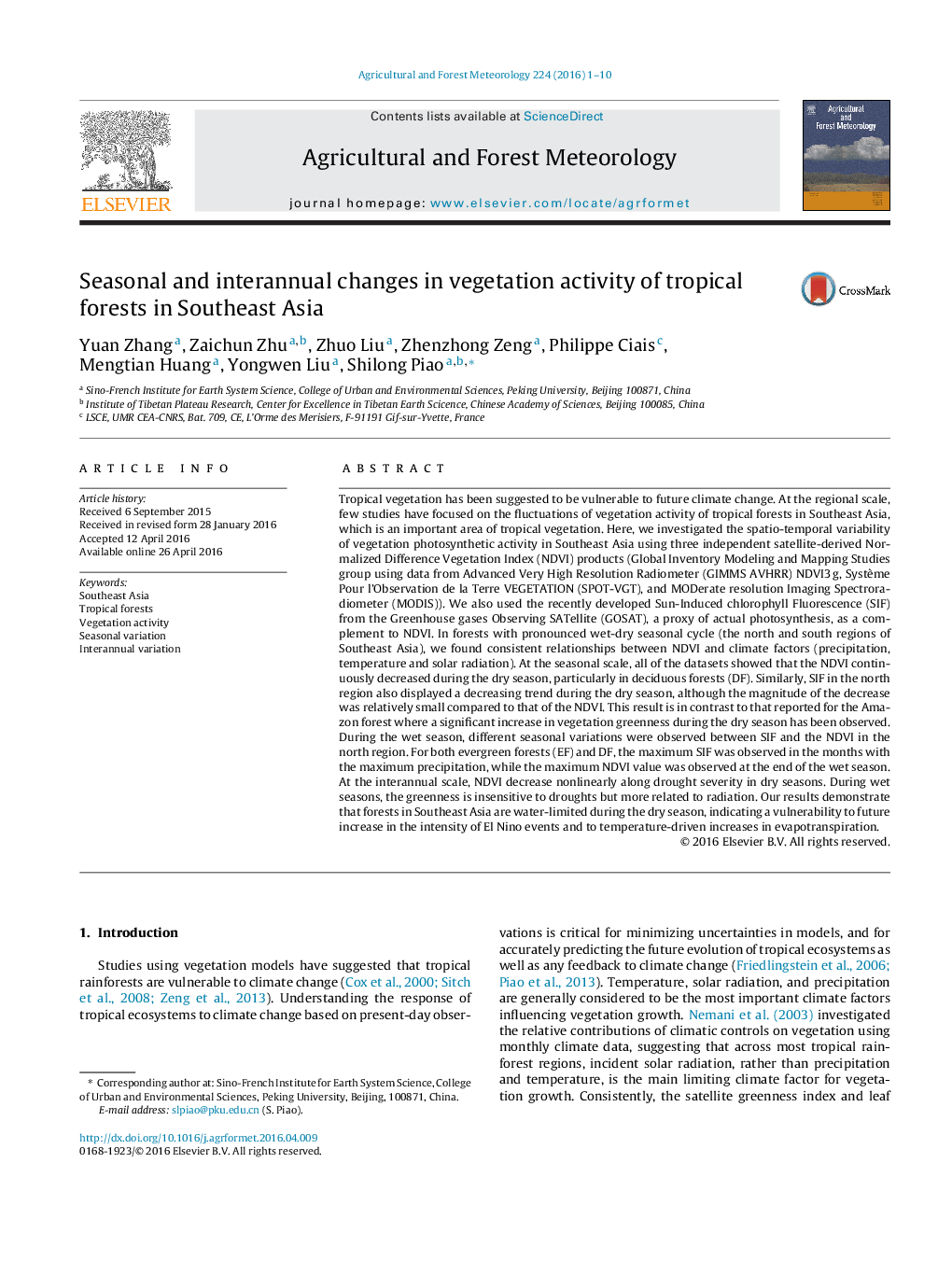 • We study vegetation activity in Southeast Asia using multiple satellite observations.
• At the seasonal scale, both NDVI and SIF decreased during the dry season.
• Different driving factors of IAV in NDVI are observed between dry and wet seasons.

Tropical vegetation has been suggested to be vulnerable to future climate change. At the regional scale, few studies have focused on the fluctuations of vegetation activity of tropical forests in Southeast Asia, which is an important area of tropical vegetation. Here, we investigated the spatio-temporal variability of vegetation photosynthetic activity in Southeast Asia using three independent satellite-derived Normalized Difference Vegetation Index (NDVI) products (Global Inventory Modeling and Mapping Studies group using data from Advanced Very High Resolution Radiometer (GIMMS AVHRR) NDVI3 g, Système Pour l’Observation de la Terre VEGETATION (SPOT-VGT), and MODerate resolution Imaging Spectroradiometer (MODIS)). We also used the recently developed Sun-Induced chlorophyll Fluorescence (SIF) from the Greenhouse gases Observing SATellite (GOSAT), a proxy of actual photosynthesis, as a complement to NDVI. In forests with pronounced wet-dry seasonal cycle (the north and south regions of Southeast Asia), we found consistent relationships between NDVI and climate factors (precipitation, temperature and solar radiation). At the seasonal scale, all of the datasets showed that the NDVI continuously decreased during the dry season, particularly in deciduous forests (DF). Similarly, SIF in the north region also displayed a decreasing trend during the dry season, although the magnitude of the decrease was relatively small compared to that of the NDVI. This result is in contrast to that reported for the Amazon forest where a significant increase in vegetation greenness during the dry season has been observed. During the wet season, different seasonal variations were observed between SIF and the NDVI in the north region. For both evergreen forests (EF) and DF, the maximum SIF was observed in the months with the maximum precipitation, while the maximum NDVI value was observed at the end of the wet season. At the interannual scale, NDVI decrease nonlinearly along drought severity in dry seasons. During wet seasons, the greenness is insensitive to droughts but more related to radiation. Our results demonstrate that forests in Southeast Asia are water-limited during the dry season, indicating a vulnerability to future increase in the intensity of El Nino events and to temperature-driven increases in evapotranspiration.