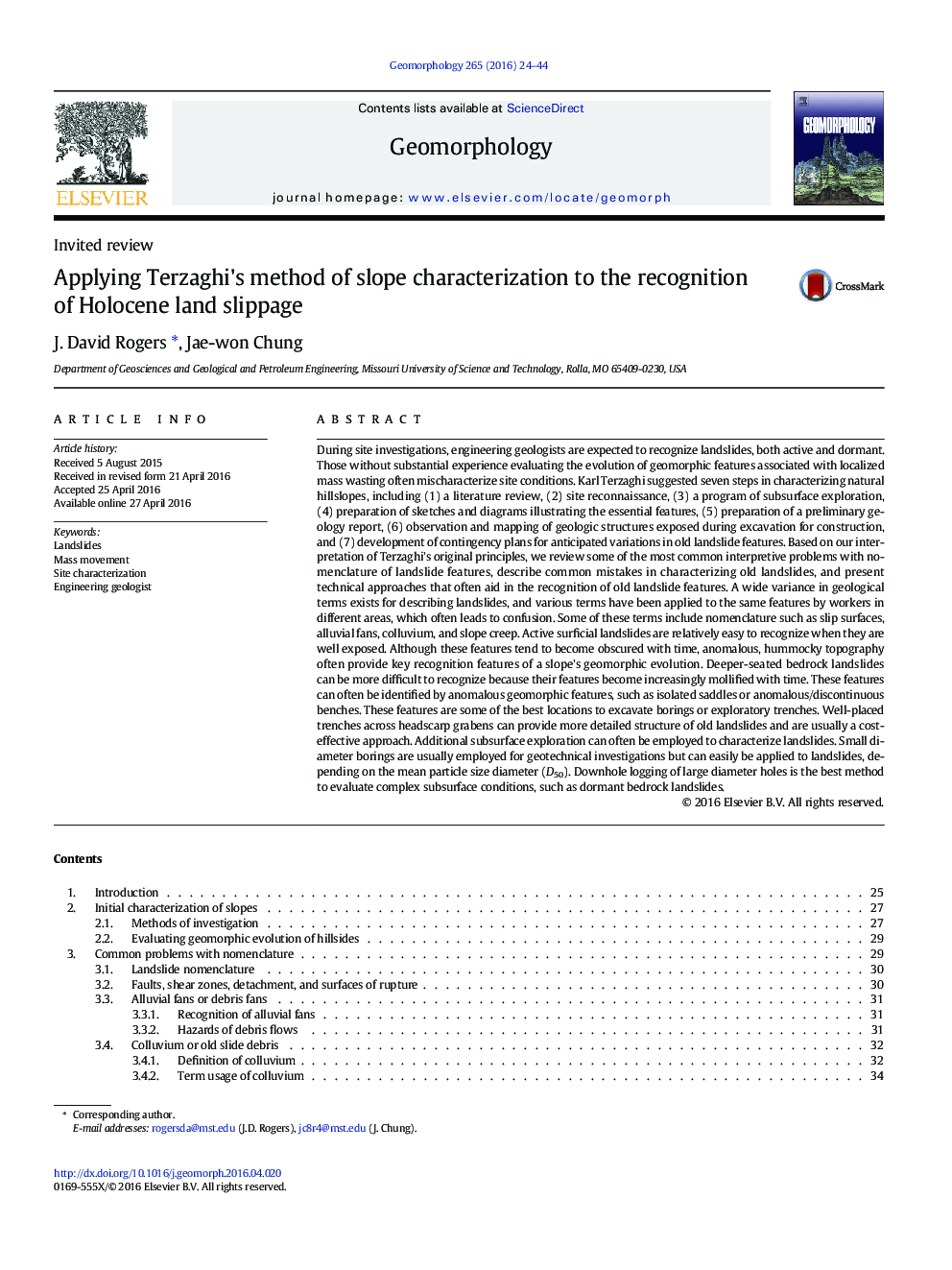 • Landslide recognition has been a vexing problem.
• K. Terzaghi championed the role of geology and presented its principles.
• Applying his principles, we reviewed problems with nomenclature of landslides.
• The common mistakes in characterization of landslide-prone terrain were discussed.
• We presented forensic studies to characterize landslides.

During site investigations, engineering geologists are expected to recognize landslides, both active and dormant. Those without substantial experience evaluating the evolution of geomorphic features associated with localized mass wasting often mischaracterize site conditions. Karl Terzaghi suggested seven steps in characterizing natural hillslopes, including (1) a literature review, (2) site reconnaissance, (3) a program of subsurface exploration, (4) preparation of sketches and diagrams illustrating the essential features, (5) preparation of a preliminary geology report, (6) observation and mapping of geologic structures exposed during excavation for construction, and (7) development of contingency plans for anticipated variations in old landslide features. Based on our interpretation of Terzaghi's original principles, we review some of the most common interpretive problems with nomenclature of landslide features, describe common mistakes in characterizing old landslides, and present technical approaches that often aid in the recognition of old landslide features. A wide variance in geological terms exists for describing landslides, and various terms have been applied to the same features by workers in different areas, which often leads to confusion. Some of these terms include nomenclature such as slip surfaces, alluvial fans, colluvium, and slope creep. Active surficial landslides are relatively easy to recognize when they are well exposed. Although these features tend to become obscured with time, anomalous, hummocky topography often provide key recognition features of a slope's geomorphic evolution. Deeper-seated bedrock landslides can be more difficult to recognize because their features become increasingly mollified with time. These features can often be identified by anomalous geomorphic features, such as isolated saddles or anomalous/discontinuous benches. These features are some of the best locations to excavate borings or exploratory trenches. Well-placed trenches across headscarp grabens can provide more detailed structure of old landslides and are usually a cost-effective approach. Additional subsurface exploration can often be employed to characterize landslides. Small diameter borings are usually employed for geotechnical investigations but can easily be applied to landslides, depending on the mean particle size diameter (D50). Downhole logging of large diameter holes is the best method to evaluate complex subsurface conditions, such as dormant bedrock landslides.