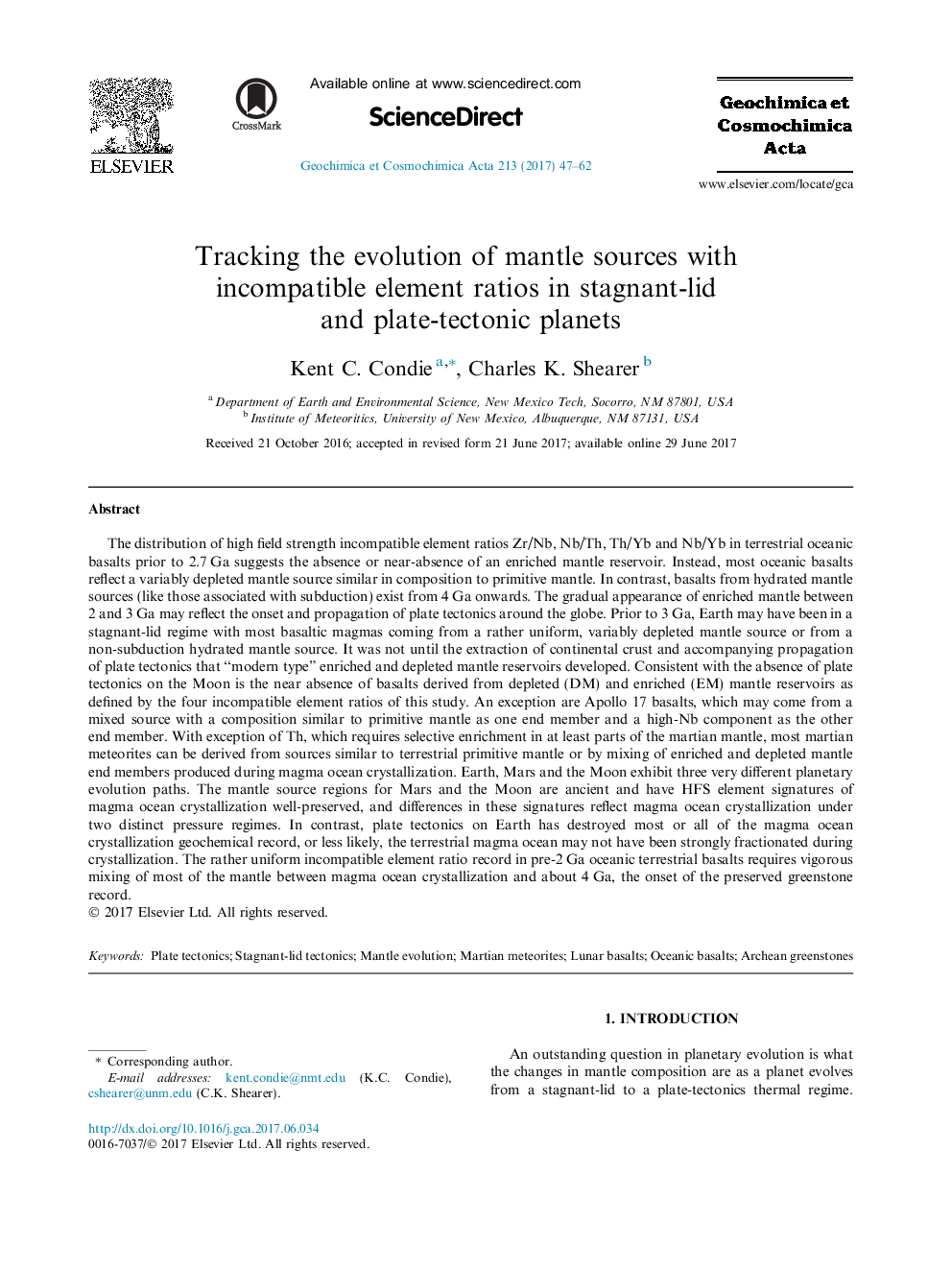 The distribution of high field strength incompatible element ratios Zr/Nb, Nb/Th, Th/Yb and Nb/Yb in terrestrial oceanic basalts prior to 2.7Â Ga suggests the absence or near-absence of an enriched mantle reservoir. Instead, most oceanic basalts reflect a variably depleted mantle source similar in composition to primitive mantle. In contrast, basalts from hydrated mantle sources (like those associated with subduction) exist from 4Â Ga onwards. The gradual appearance of enriched mantle between 2 and 3Â Ga may reflect the onset and propagation of plate tectonics around the globe. Prior to 3Â Ga, Earth may have been in a stagnant-lid regime with most basaltic magmas coming from a rather uniform, variably depleted mantle source or from a non-subduction hydrated mantle source. It was not until the extraction of continental crust and accompanying propagation of plate tectonics that “modern type” enriched and depleted mantle reservoirs developed. Consistent with the absence of plate tectonics on the Moon is the near absence of basalts derived from depleted (DM) and enriched (EM) mantle reservoirs as defined by the four incompatible element ratios of this study. An exception are Apollo 17 basalts, which may come from a mixed source with a composition similar to primitive mantle as one end member and a high-Nb component as the other end member. With exception of Th, which requires selective enrichment in at least parts of the martian mantle, most martian meteorites can be derived from sources similar to terrestrial primitive mantle or by mixing of enriched and depleted mantle end members produced during magma ocean crystallization. Earth, Mars and the Moon exhibit three very different planetary evolution paths. The mantle source regions for Mars and the Moon are ancient and have HFS element signatures of magma ocean crystallization well-preserved, and differences in these signatures reflect magma ocean crystallization under two distinct pressure regimes. In contrast, plate tectonics on Earth has destroyed most or all of the magma ocean crystallization geochemical record, or less likely, the terrestrial magma ocean may not have been strongly fractionated during crystallization. The rather uniform incompatible element ratio record in pre-2Â Ga oceanic terrestrial basalts requires vigorous mixing of most of the mantle between magma ocean crystallization and about 4Â Ga, the onset of the preserved greenstone record.