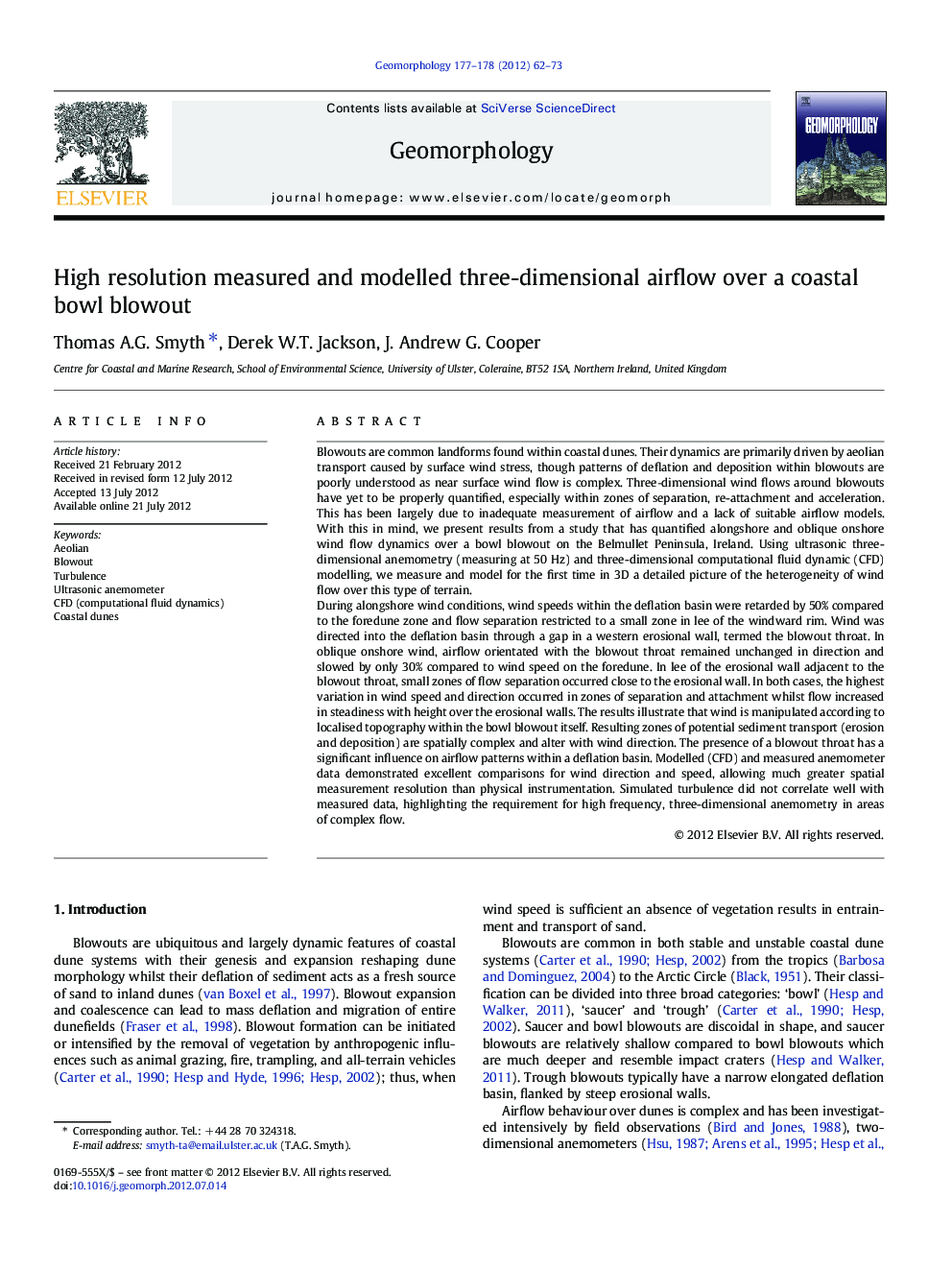 Blowouts are common landforms found within coastal dunes. Their dynamics are primarily driven by aeolian transport caused by surface wind stress, though patterns of deflation and deposition within blowouts are poorly understood as near surface wind flow is complex. Threeâdimensional wind flows around blowouts have yet to be properly quantified, especially within zones of separation, re-attachment and acceleration. This has been largely due to inadequate measurement of airflow and a lack of suitable airflow models. With this in mind, we present results from a study that has quantified alongshore and oblique onshore wind flow dynamics over a bowl blowout on the Belmullet Peninsula, Ireland. Using ultrasonic three-dimensional anemometry (measuring at 50Â Hz) and three-dimensional computational fluid dynamic (CFD) modelling, we measure and model for the first time in 3D a detailed picture of the heterogeneity of wind flow over this type of terrain.During alongshore wind conditions, wind speeds within the deflation basin were retarded by 50% compared to the foredune zone and flow separation restricted to a small zone in lee of the windward rim. Wind was directed into the deflation basin through a gap in a western erosional wall, termed the blowout throat. In oblique onshore wind, airflow orientated with the blowout throat remained unchanged in direction and slowed by only 30% compared to wind speed on the foredune. In lee of the erosional wall adjacent to the blowout throat, small zones of flow separation occurred close to the erosional wall. In both cases, the highest variation in wind speed and direction occurred in zones of separation and attachment whilst flow increased in steadiness with height over the erosional walls. The results illustrate that wind is manipulated according to localised topography within the bowl blowout itself. Resulting zones of potential sediment transport (erosion and deposition) are spatially complex and alter with wind direction. The presence of a blowout throat has a significant influence on airflow patterns within a deflation basin. Modelled (CFD) and measured anemometer data demonstrated excellent comparisons for wind direction and speed, allowing much greater spatial measurement resolution than physical instrumentation. Simulated turbulence did not correlate well with measured data, highlighting the requirement for high frequency, three-dimensional anemometry in areas of complex flow.