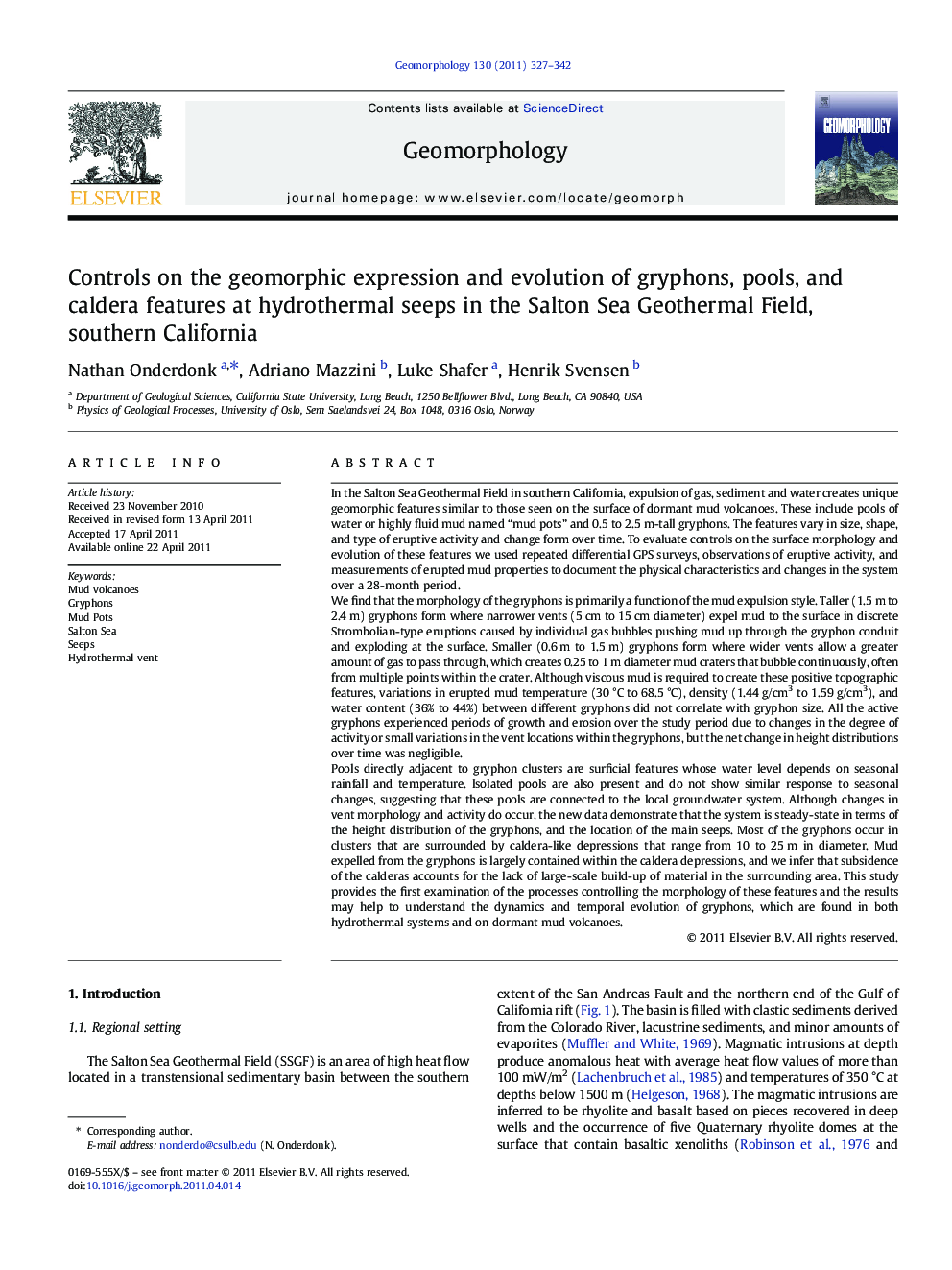 In the Salton Sea Geothermal Field in southern California, expulsion of gas, sediment and water creates unique geomorphic features similar to those seen on the surface of dormant mud volcanoes. These include pools of water or highly fluid mud named “mud pots” and 0.5 to 2.5Â m-tall gryphons. The features vary in size, shape, and type of eruptive activity and change form over time. To evaluate controls on the surface morphology and evolution of these features we used repeated differential GPS surveys, observations of eruptive activity, and measurements of erupted mud properties to document the physical characteristics and changes in the system over a 28-month period.We find that the morphology of the gryphons is primarily a function of the mud expulsion style. Taller (1.5Â m to 2.4Â m) gryphons form where narrower vents (5Â cm to 15Â cm diameter) expel mud to the surface in discrete Strombolian-type eruptions caused by individual gas bubbles pushing mud up through the gryphon conduit and exploding at the surface. Smaller (0.6Â m to 1.5Â m) gryphons form where wider vents allow a greater amount of gas to pass through, which creates 0.25 to 1Â m diameter mud craters that bubble continuously, often from multiple points within the crater. Although viscous mud is required to create these positive topographic features, variations in erupted mud temperature (30Â Â°C to 68.5Â Â°C), density (1.44Â g/cm3 to 1.59Â g/cm3), and water content (36% to 44%) between different gryphons did not correlate with gryphon size. All the active gryphons experienced periods of growth and erosion over the study period due to changes in the degree of activity or small variations in the vent locations within the gryphons, but the net change in height distributions over time was negligible.Pools directly adjacent to gryphon clusters are surficial features whose water level depends on seasonal rainfall and temperature. Isolated pools are also present and do not show similar response to seasonal changes, suggesting that these pools are connected to the local groundwater system. Although changes in vent morphology and activity do occur, the new data demonstrate that the system is steady-state in terms of the height distribution of the gryphons, and the location of the main seeps. Most of the gryphons occur in clusters that are surrounded by caldera-like depressions that range from 10 to 25Â m in diameter. Mud expelled from the gryphons is largely contained within the caldera depressions, and we infer that subsidence of the calderas accounts for the lack of large-scale build-up of material in the surrounding area. This study provides the first examination of the processes controlling the morphology of these features and the results may help to understand the dynamics and temporal evolution of gryphons, which are found in both hydrothermal systems and on dormant mud volcanoes.

âº Gryphons, pools, and caldera features in the Salton Sea hydrothermal system were monitored to determine controls on their geomorphic development. âº Variations in gryphon height and morphology are controlled by the style of mud expulsion and gas release. âº The gryphons are not growing as a group over time. âº No large-scale buildup of erupted mud is present due to constant subsidence of calderas that form around the gryphons. âº The seep locations are determined by faults and/or fractures in the subsurface.