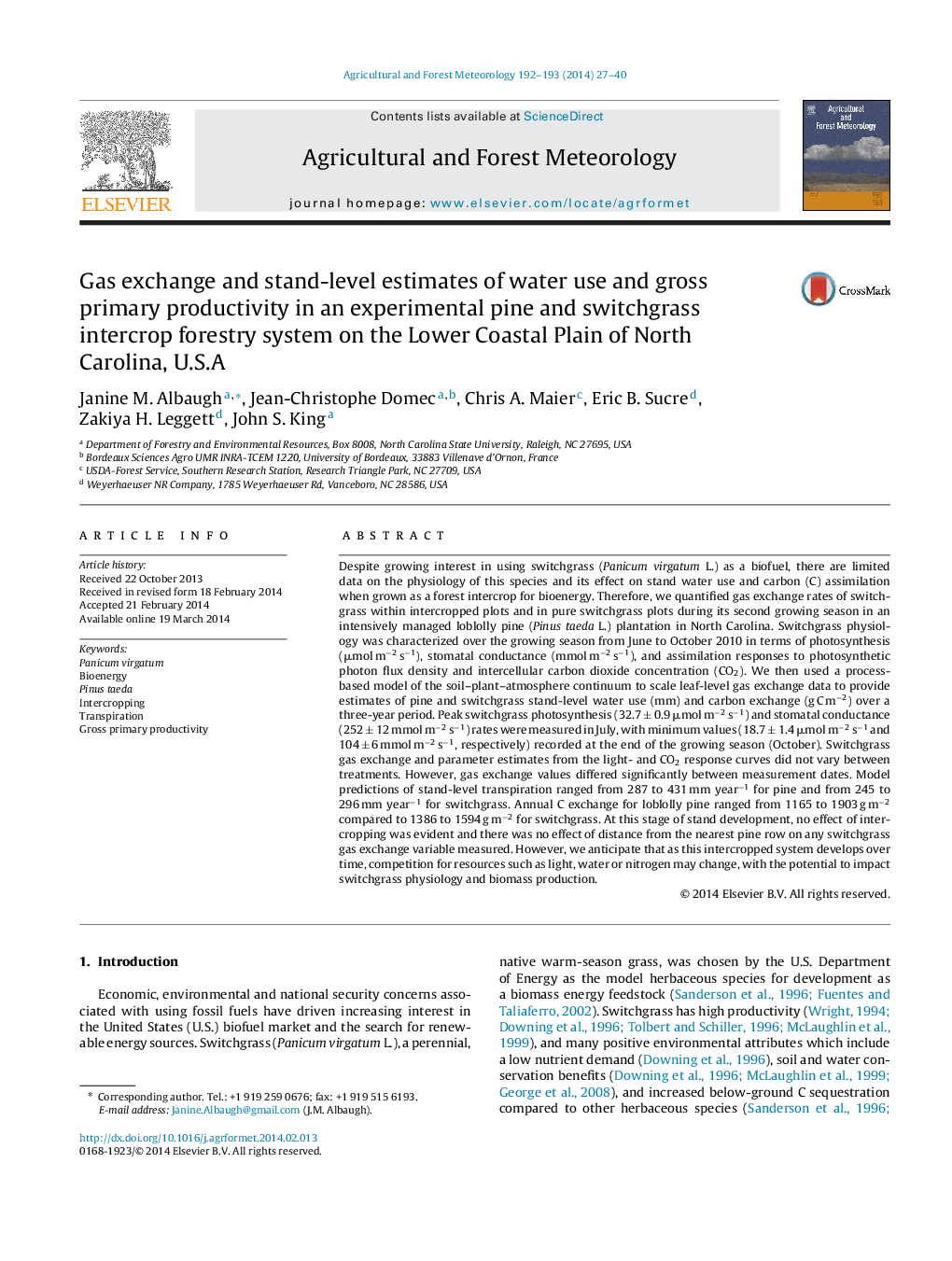 • We quantified pine and switchgrass water potential and gas exchange rates.
• We used a model to scale these data to stand-level estimates of water use and carbon exchange.
• Model predictions of pine transpiration ranged from 287 to 431 mm year−1.
• Model predictions of switchgrass transpiration ranged from 245 to 296 mm year−1.
• At this stage of stand development, no effect of intercropping was evident.

Despite growing interest in using switchgrass (Panicum virgatum L.) as a biofuel, there are limited data on the physiology of this species and its effect on stand water use and carbon (C) assimilation when grown as a forest intercrop for bioenergy. Therefore, we quantified gas exchange rates of switchgrass within intercropped plots and in pure switchgrass plots during its second growing season in an intensively managed loblolly pine (Pinus taeda L.) plantation in North Carolina. Switchgrass physiology was characterized over the growing season from June to October 2010 in terms of photosynthesis (μmol m−2 s−1), stomatal conductance (mmol m−2 s−1), and assimilation responses to photosynthetic photon flux density and intercellular carbon dioxide concentration (CO2). We then used a process-based model of the soil–plant–atmosphere continuum to scale leaf-level gas exchange data to provide estimates of pine and switchgrass stand-level water use (mm) and carbon exchange (g C m−2) over a three-year period. Peak switchgrass photosynthesis (32.7 ± 0.9 μmol m−2 s−1) and stomatal conductance (252 ± 12 mmol m−2 s−1) rates were measured in July, with minimum values (18.7 ± 1.4 μmol m−2 s−1 and 104 ± 6 mmol m−2 s−1, respectively) recorded at the end of the growing season (October). Switchgrass gas exchange and parameter estimates from the light- and CO2 response curves did not vary between treatments. However, gas exchange values differed significantly between measurement dates. Model predictions of stand-level transpiration ranged from 287 to 431 mm year−1 for pine and from 245 to 296 mm year−1 for switchgrass. Annual C exchange for loblolly pine ranged from 1165 to 1903 g m−2 compared to 1386 to 1594 g m−2 for switchgrass. At this stage of stand development, no effect of intercropping was evident and there was no effect of distance from the nearest pine row on any switchgrass gas exchange variable measured. However, we anticipate that as this intercropped system develops over time, competition for resources such as light, water or nitrogen may change, with the potential to impact switchgrass physiology and biomass production.