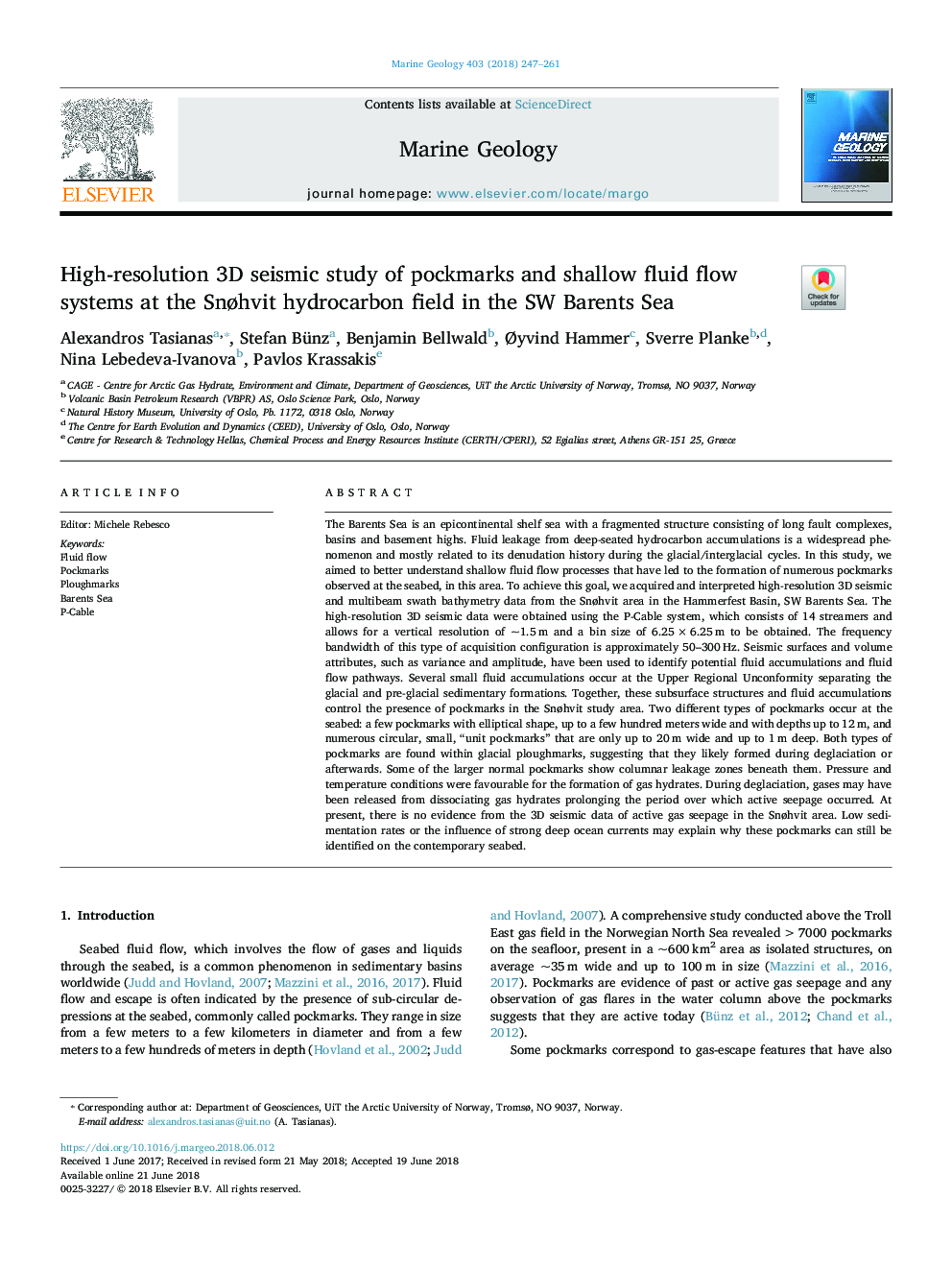 چکیده انگلیسی
The Barents Sea is an epicontinental shelf sea with a fragmented structure consisting of long fault complexes, basins and basement highs. Fluid leakage from deep-seated hydrocarbon accumulations is a widespread phenomenon and mostly related to its denudation history during the glacial/interglacial cycles. In this study, we aimed to better understand shallow fluid flow processes that have led to the formation of numerous pockmarks observed at the seabed, in this area. To achieve this goal, we acquired and interpreted high-resolution 3D seismic and multibeam swath bathymetry data from the SnÃ¸hvit area in the Hammerfest Basin, SW Barents Sea. The high-resolution 3D seismic data were obtained using the P-Cable system, which consists of 14 streamers and allows for a vertical resolution of ~1.5â¯m and a bin size of 6.25â¯Ãâ¯6.25â¯m to be obtained. The frequency bandwidth of this type of acquisition configuration is approximately 50-300â¯Hz. Seismic surfaces and volume attributes, such as variance and amplitude, have been used to identify potential fluid accumulations and fluid flow pathways. Several small fluid accumulations occur at the Upper Regional Unconformity separating the glacial and pre-glacial sedimentary formations. Together, these subsurface structures and fluid accumulations control the presence of pockmarks in the SnÃ¸hvit study area. Two different types of pockmarks occur at the seabed: a few pockmarks with elliptical shape, up to a few hundred meters wide and with depths up to 12â¯m, and numerous circular, small, “unit pockmarks” that are only up to 20â¯m wide and up to 1â¯m deep. Both types of pockmarks are found within glacial ploughmarks, suggesting that they likely formed during deglaciation or afterwards. Some of the larger normal pockmarks show columnar leakage zones beneath them. Pressure and temperature conditions were favourable for the formation of gas hydrates. During deglaciation, gases may have been released from dissociating gas hydrates prolonging the period over which active seepage occurred. At present, there is no evidence from the 3D seismic data of active gas seepage in the SnÃ¸hvit area. Low sedimentation rates or the influence of strong deep ocean currents may explain why these pockmarks can still be identified on the contemporary seabed.
ناشر
Database: Elsevier - ScienceDirect (ساینس دایرکت)
Journal: Marine Geology - Volume 403, 1 September 2018, Pages 247-261
نویسندگان
Alexandros Tasianas, Stefan Bünz, Benjamin Bellwald, Ãyvind Hammer, Sverre Planke, Nina Lebedeva-Ivanova, Pavlos Krassakis,
دانلود مقاله + سفارش ترجمه
دانلود مقاله ISI انگلیسی
رایگان برای ایرانیان
سفارش ترجمه تخصصی
با تضمین قیمت و کیفیت
منتشر شده در