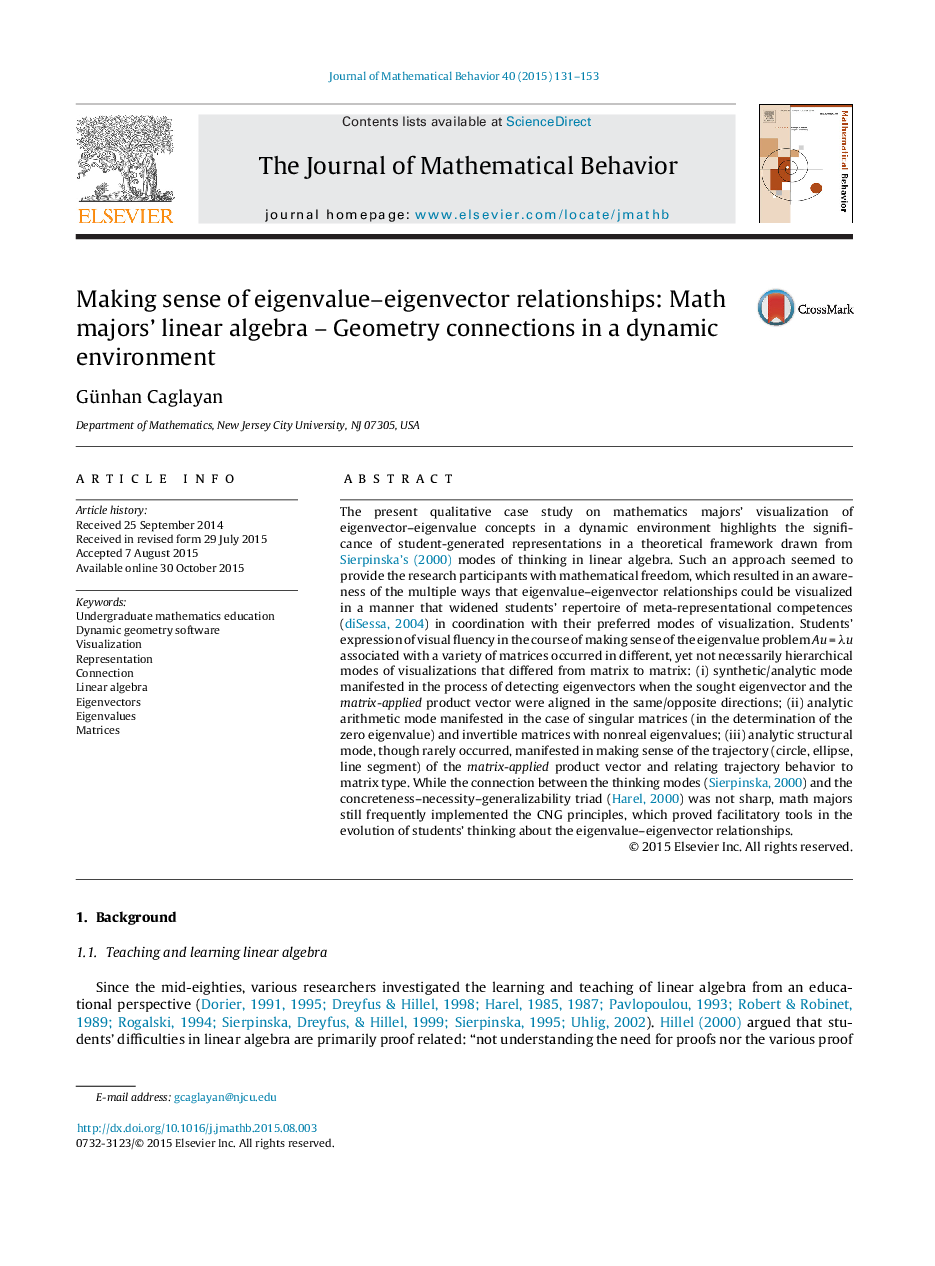 • Qualitative case study on mathematics majors’ visualization of eigenvector–eigenvalue concepts in a dynamic environment.
• Students’ reference to various modes of linear algebraic thinking and meta-representational competences.
• The concreteness–necessity–generalizability principles as facilitatory tools in the evolution of students’ thinking about the eigenvector–eigenvalue concepts.

The present qualitative case study on mathematics majors’ visualization of eigenvector–eigenvalue concepts in a dynamic environment highlights the significance of student-generated representations in a theoretical framework drawn from Sierpinska's (2000) modes of thinking in linear algebra. Such an approach seemed to provide the research participants with mathematical freedom, which resulted in an awareness of the multiple ways that eigenvalue–eigenvector relationships could be visualized in a manner that widened students’ repertoire of meta-representational competences (diSessa, 2004) in coordination with their preferred modes of visualization. Students’ expression of visual fluency in the course of making sense of the eigenvalue problem Au = λu associated with a variety of matrices occurred in different, yet not necessarily hierarchical modes of visualizations that differed from matrix to matrix: (i) synthetic/analytic mode manifested in the process of detecting eigenvectors when the sought eigenvector and the matrix-applied product vector were aligned in the same/opposite directions; (ii) analytic arithmetic mode manifested in the case of singular matrices (in the determination of the zero eigenvalue) and invertible matrices with nonreal eigenvalues; (iii) analytic structural mode, though rarely occurred, manifested in making sense of the trajectory (circle, ellipse, line segment) of the matrix-applied product vector and relating trajectory behavior to matrix type. While the connection between the thinking modes ( Sierpinska, 2000) and the concreteness–necessity–generalizability triad (Harel, 2000) was not sharp, math majors still frequently implemented the CNG principles, which proved facilitatory tools in the evolution of students’ thinking about the eigenvalue–eigenvector relationships.