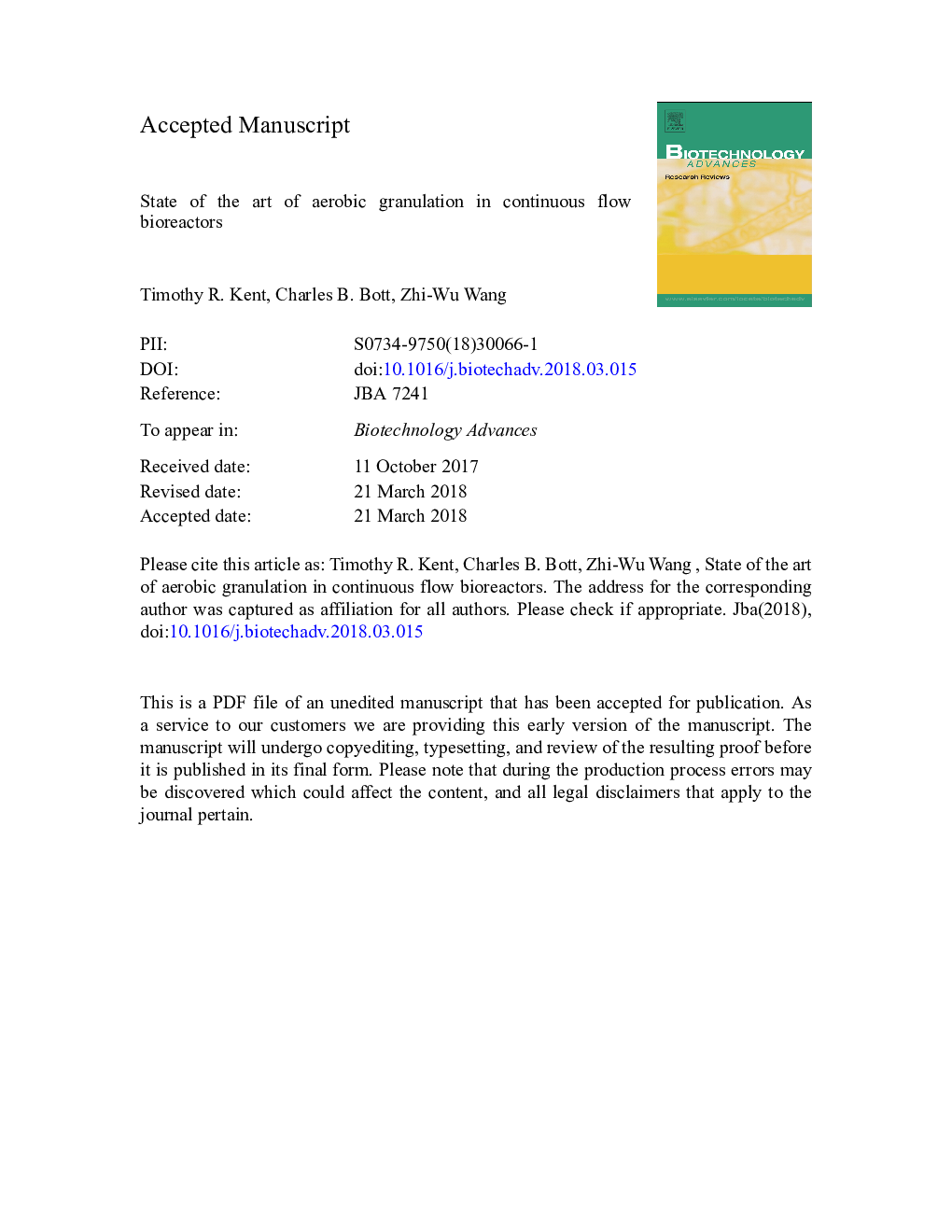 چکیده انگلیسی
In the wake of the success of aerobic granulation in sequential batch reactors (SBRs) for treating wastewater, attention is beginning to turn to continuous flow applications. This is a necessary step given the advantages of continuous flow treatment processes and the fact that the majority of full-scale wastewater treatment plants across the world are operated with aeration tanks and clarifiers in a continuous flow mode. As in SBRs, applying a selection pressure, based on differences in either settling velocity or the size of the biomass, is essential for successful granulation in continuous flow reactors (CFRs). CFRs employed for aerobic granulation come in multiple configurations, each with their own means of achieving such a selection pressure. Other factors, such as bioaugmentation and hydraulic shear force, also contribute to aerobic granulation to some extent. Besides the formation of aerobic granules, long-term stability of aerobic granules is also a critical issue to be addressed. Inorganic precipitation, special inocula, and various operational optimization strategies have been used to improve granule long-term structural integrity. Accumulated studies reviewed in this work demonstrate that aerobic granulation in CFRs is capable of removing a wide spectrum of contaminants and achieving properties generally comparable to those in SBRs. Despite the notable research progress made toward successful aerobic granulation in lab-scale CFRs, to the best of our knowledge, there are only three full-scale tests of the technique, two being seeded with anammox-supported aerobic granules and the other with conventional aerobic granules; two other process alternatives are currently in development. Application of settling- or size-based selection pressures and feast/famine conditions are especially difficult to implement to these and similar mainstream systems. Future research efforts needs to be focused on the optimization of the granule-to-floc ratio, enhancement of granule activity, improvement of long-term granule stability, and a better understanding of aerobic granulation mechanisms in CFRs, especially in full-scale applications.
ناشر
Database: Elsevier - ScienceDirect (ساینس دایرکت)
Journal: Biotechnology Advances - Volume 36, Issue 4, JulyâAugust 2018, Pages 1139-1166
نویسندگان
Timothy R. Kent, Charles B. Bott, Zhi-Wu Wang,
دانلود مقاله + سفارش ترجمه
دانلود مقاله ISI انگلیسی
رایگان برای ایرانیان
سفارش ترجمه تخصصی
با تضمین قیمت و کیفیت
منتشر شده در